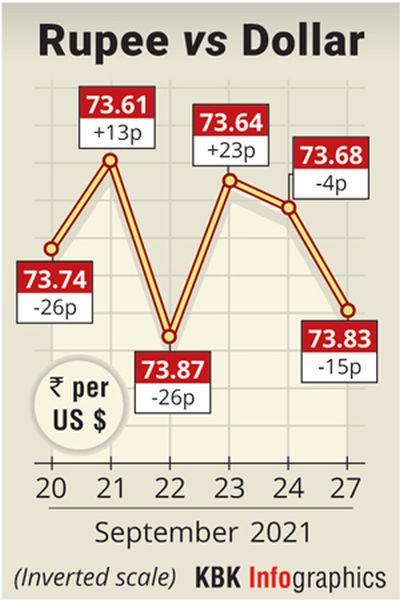 The rupee dropped by 15 paise to close at 73.83 against the US dollar on Monday as a stronger greenback against key rivals and rising crude oil prices weighed on investor sentiment.
Besides, multiple bouts of volatility on domestic equities front and mixed cues from global financial markets put the rupee under pressure, analysts observed.
At the interbank foreign exchange market, the rupee opened on a weak note at 73.70 and slid to the day's lowest level at 73.84 a dollar towards the fag-end of the session. For a brief period, it ventured into positive territory and touched a high of 73.60 in the first half of the session.
The domestic unit finally settled the day at 73.83 a dollar, showing a drop of 15 paise over its previous close. On Friday, the currency had closed 4 paise down at 73.68 against the US dollar.
"Rupee traded strongly near 73.70 in the first half on the back of strength in capital markets, later gave up gains and fell as some profit booking was witnessed in capital markets. Higher crude prices also pushed a fall in the rupee. Going ahead range for rupee can be seen between 73.50-74.10," Jateen Trivedi, Senior Research Analyst at LKP Securities said.
The dollar index, which gauges the greenback's strength against a basket of six currencies, rose by 0.11 per cent to 93.42.
On the domestic equity market front, the BSE Sensex ended marginally higher by 29.41 points or 0.05 per cent higher at 60,077.88. Similarly, the NSE Nifty closed the day 1.90 points or 0.01 per cent higher at 17,855.10.
Meanwhile, global crude oil benchmark Brent futures advanced 1.29 per cent to USD 78.23 per barrel.
Foreign institutional investors were net buyers in the capital market on Friday as they purchased shares worth Rs 442.49 crore, as per exchange data.
« Back to LIVE