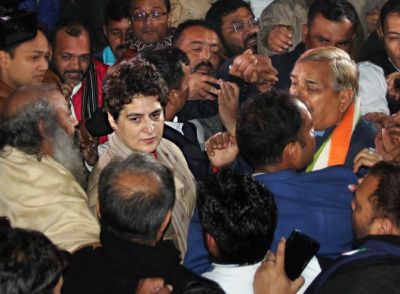 Congress general secretary Priyanka Gandhi Vadra arrived here on Monday on a five-day visit during which she will discuss with workers and leaders the party's preparedness for next year's Uttar Pradesh Assembly elections, sources said.
Her visit to the state came just a day after chief minister Yogi Adityanath expanded his council of ministers by inducting Jitin Prasada and six others to balance the caste and regional aspirations ahead of the Assembly elections.
Prasada, who had crossed over to the BJP from the Congress in June, was administered oath as a cabinet minister, while six others were sworn in as ministers of state.
"Priyanka ji has arrived on a five-day visit to the state. She will meet party workers and leaders, and deliberate upon election preparedness of the party for the 2022 UP Assembly polls," state Congress spokesperson Ashok Singh said.
This is her second visit to the state this month.
On September 13, she wrapped up her five-day tour of Uttar Pradesh during which she exhorted party workers to work round the clock for the next year's elections. She had told party workers in Rae Bareli that the Congress was planning to declare candidates well in time for the upcoming elections.
The Congress has fought the 2017 Uttar Pradesh Assembly polls in alliance with the Samajwadi Party. The grand old party had managed to win just seven of the 114 seats it had contested with a vote share of 6.25 per cent.
This time, the Congress party has already announced that it will fight the 2022 polls without aligning with any big political party.
« Back to LIVE