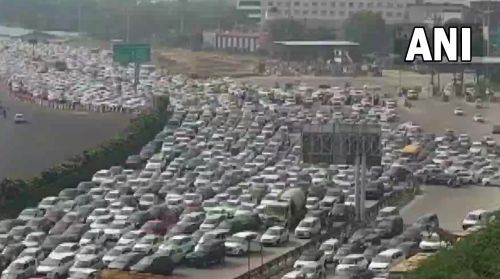 Hundreds of cars are stacked bumper-to bumper along the Gurgaon-Delhi border this morning as the vehicles entering the national capital are being checked by Delhi police in wake of the Bharat Bandh called by protesting farmers seeking withdrawal of three controversial farm laws.
The Ghaziabad Police closed a national highway that connects Ghaziabad and Nizamuddin in Delhi. At the UP Gate, which is also the protest site of the Bharatiya Kisan Union (BKU) since November last year, police have put up barricades on the highway to check vehicles.The Noida traffic police also cautioned commuters against taking the routes passing through Ghazipur in adjoining Ghaziabad for travelling to or from Delhi. The Samyukta Kisan Morcha, an umbrella body of over 40 farmers' unions leading the 10-month-old agitation for withdrawal of three contentious farm laws, has called for the Bharat Bandh on Monday. Routes between Noida and Delhi via Chilla and DND flyway are open. But there was an increased traffic on these routes during the peak office hours. The traffic movement had slowed down a bit because of the pressure, a traffic police official told PTI.
« Back to LIVE