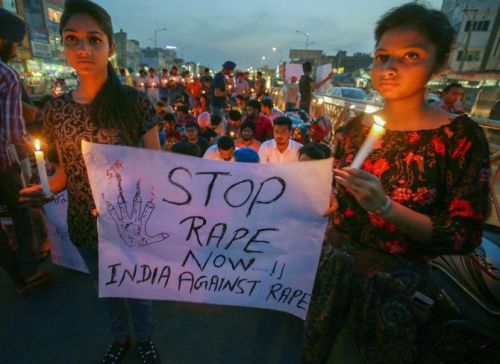 Two girls were allegedly held hostage and gang raped in a cyber cafe in Kannauj district when they had gone to get some documents photocopied, police said on Monday.
Four men took hostage of the two girl students at the cafe on September 13 and one of the accused also recorded the act, police said. The accused also extorted Rs 10,000 from the girls, threatening to circulate the video.
Superintendent of Police Prashant Verma said a case was registered at Sadar Kotwali on Sunday against six people, including a woman, based on the complaint of one of the girls.
The 17-year-old student in her complaint said she had gone to the cyber cafe along with her friend at noon on September 13 when four people, who were already present there, raped them.
One of the accused also made a video of the act and handed it over to his brother-in-law who extorted Rs 10,000 by threatening to make it viral, police said.
The girl said she and her friend stole money from their houses to give it to the accused, police said. It was the missing money which alerted their family members after which the incident came to light, they said.
The girls have been sent to the district hospital for medical examination.
Police are raiding all possible places, the SP said, adding in the initial investigation, the police have found signs of prostitution from the cafe.
The victim had said that after the incident, the wife of one of the accused made her phone calls pressurising her into prostitution and some neighbours have also spoken about presence of young girls there, he added.
The SP said efforts are on to nab the accused.
« Back to LIVE