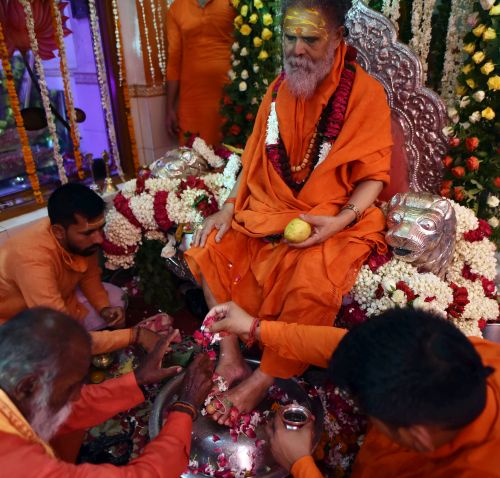 ANI Photo
Mahant Narendra Giri, the president of Akhil Bharatiya Akhada Parishad, was found dead on Monday at Baghambari Muth in Allahbad, police said.
The Parishad is the largest organisation of sadhus in India.
According to Inspector General of Police K P Singh, Mahant Giri's body was found hanging from the ceiling by his disciples.
A purported suicide note was also found at the site in which the seer had written that he was mentally disturbed and was ending his life. He had also delegated various responsibilities to his disciples in the note, the police said.
The IGP said that police had received a call at 5.30 PM from the Muth that Giri had hanged himself.
Prima facie it appeared to be a case of suicide but things will be clearer after the post-mortem and forensic tests, the police said.
The influential Hindu seer was hospitalised in April after he tested positive from COVID-19.
Several political and religious leaders condoled the demise of Giri.
"The death of Mahant Narendra Giri ji, President of Akhil Bharatiya Akhara Parishad, is an irreparable loss to the spiritual world. I pray to Lord Shri Ram to grant the departed soul a place at his feet and strength to the bereaved followers to bear this sorrow. Om Shanti," Uttar Pradesh Chief Minister Yogi Adityanath tweeted.
« Back to LIVE