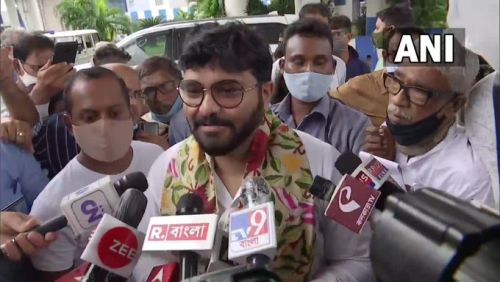 Former Union minister Babul Supriyo, who joined the Trinamool Congress last week, met Chief Minister Mamata Banerjee on Monday. Supriyo, the BJP MP from Asansol, visited state secretariat Nabanna to meet Banerjee.
"It was great meeting 'Didi'. We had a very good discussion. I thanked her for giving me an opportunity to work for Bengal and serve the people. I am really touched by the affection and warmth of 'Didi' and Abhishek Banerjee," he told reporters after the meeting.
Asked about his role in the TMC, Supriyo said it was for the party to decide. "I have nothing to say about it. It is for the party and our supremo Mamata Banerjee to decide. It is her prerogative," he said.
"She asked me to work with all my heart and sing with all my heart which I think is icing on the cake. She said 'Pujor samayo tumi gaan karo' (Sing during puja).
"We had a very musical talk, at the same time whatever she said was really music to my ears."
This was Supriyo's first meeting with Banerjee after he joined the TMC on Saturday.
« Back to LIVE