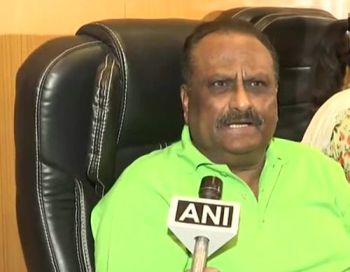 Sameer Wankhede's father
Mumbai Narcotics Control Bureau chief Sameer Wankhede's father Dnyandev Wankhede on Wednesday challenged before the division bench of the Bombay high court the order of its single-judge bench that had refused to restrain Maharashtra minister Nawab Malik from making comments and putting social media posts against the anti-drug agency officer and his family.
In his appeal mentioned before a division bench led by Justice SJ Kathawala, Dnyandev Wankhede contended that since the single-judge bench had held that Malik's statements against Sameer Wankhede had stemmed out of malice, the minister should have been restrained from continuing making defamatory comments against him and his family.
He requested the division bench that pending the final disposal of his appeal, the high court pass an order of temporary injunction restraining Malik and his agents from making any defamatory comments against the Wankhedes.
On Monday, a single-judge bench of Justice Madhav Jamdar had refused to grant the Wankhede senior any interim relief in his defamation suit filed against Malik, a leader of  Maharashtra's ruling party NCP.
Malik has been raising a slew of allegations against Sameer Wankhede after the Mumbai NCB team allegedly seized drugs from a cruise ship earlier last month.
Challenging the November 22 order, Dnyandev Wankhede said the single-judge bench had been wrong in denying him interim relief in his defamation suit filed against Nawab Malik.
In his appeal mentioned before the division bench, Dnyandev Wankhede said that the appeal was being filed only to a limited extent as he was aggrieved and dissatisfied by the findings recorded by the single-judge bench in its order.
"The prayer for injunction was rejected under the impression that the plaintiff was seeking the same in a blanket manner which was not the case," the appeal reads.
He said that the interviews given to news channels, and statements and social media posts etc., made by Malik against the Wankhedes were "highly defamatory, and libellous" as the same contained "incorrect facts, innuendos, and conclusions."
They were a "deliberate attempt on Malik's part to knowingly and maliciously defame" him, his son Sameer, and his family, Dnyandev Wankhede said in the appeal.
Malik's statements not just caused an irreparable loss to his and his family members' reputation but also breached their right to live with their dignity intact. -- PTI
« Back to LIVE