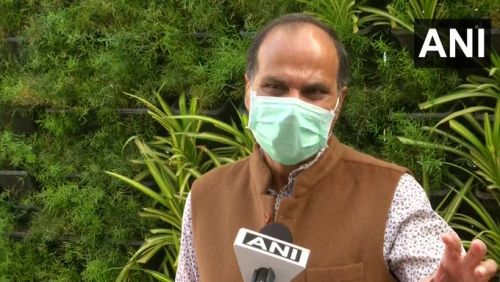 After 12 of 17 Congress MLAs in Meghalaya joined the Trinamool Congress, senior Congress leader Adhir Ranjan Chowdhury on Thursday challenged that the TMC to make them contest on the party's ticket.
On Wednesday, the Trinamool Congress (TMC) claimed that 12 Congress MLAs from Meghalaya have joined their party.
"This conspiracy to break Congress is happening not only in Meghalaya but whole northeast. I challenge the TMC to make them resign as the Congress MLA and contest on the party's ticket. Even if they reportedly joined the TMC, they are still the Congress MLA and it is the Congress voters who have voted them. If they win on TMC tickets then we will recognise your capability," Chowdhury said.
He also alleged that the TMC wants to divide the Congress and help Prime Minister Narendra Modi and BJP.
"If she (Mamata Banerjee) meets Sonia Gandhi now, then PM Modi will get angry. Her actions changed soon after her nephew was summoned by ED. Before this, she wrote a letter to Sonia Gandhi to fight against BJP together," Chowdhury said.
« Back to LIVE

Gen Rawat a strong proponent of defence ties: US

General Bipin Rawat, India's first Chief of Defence Staff who died in a tragic helicopter crash in Tamil Nadu, was an exceptional leader, a valued partner and a strong proponent of US-India defence ties and helped deepen the bilateral...