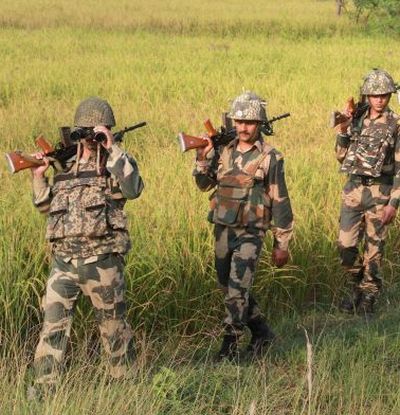 A public interest litigation challenging the central government's power to decide the jurisdiction of Border Security Force (BSF) was moved before the Calcutta High Court on Thursday.
The Centre recently amended the BSF Act to authorise the force to undertake search, seizure and arrest within a larger 50 km stretch, instead of 15 km, from the international border in Punjab, West Bengal and Assam.
A division bench comprising Chief Justice Prakash Shrivastava and Justice R Bharadwaj directed the petitioner to serve notice to the BSF authority on the matter.
The bench directed that the matter will come up for hearing on December 14.
According to the petitioner's lawyer Sabyasachi Chatterjee, the PIL claimed that the power of the central government under Section 139, Clause I, of BSF Act on deciding jurisdiction of the force is against the federal structure of the country.
Section 139 of the Act deals with powers and duties conferrable and imposable on members of the force.
The governments of West Bengal and Punjab have objected to the Centre's decision to extend the jurisdiction of BSF.
« Back to LIVE