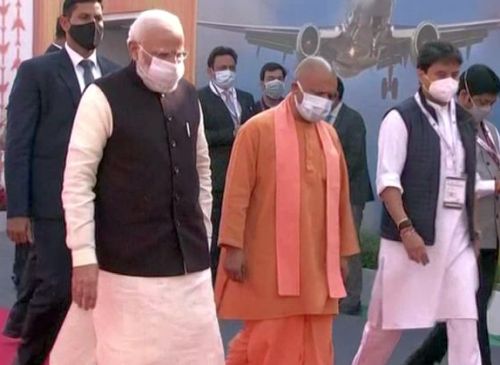 Over 50 villagers from Noida who wanted to hand over to Prime Minister Narendra Modi a memorandum of their demands were detained by police early on Thursday in a "preventive measure" for law and order situation, officials said.
There was also a brief commotion during Modi's address at Jewar by a group in the gathering of thousands which was demanding that a bench of the Allahabad high court be set up in western Uttar Pradesh.
The prime minister was at Jewar in Gautam Buddh Nagar district on Thursday to lay the foundation stone for the Noida International Airport, with Uttar Pradesh Chief Minister Yogi Adityanath in attendance at the event.
The villagers, who were detained and taken to the police lines of adjoining Ghaziabad district, have been protesting against the Noida Authority for months now, chiefly demanding increased compensation for their land, which was acquired by the state government in the past.
While police officials said they "could not immediately" confirm the number of people who had been detained, the protesters pegged the figure at 60, saying they were picked up from outside the Noida Authority's office in the city before they could move to Jewar to hand over the memorandum to PM Modi.
"We were at the protest site near the authority's office when police picked us up around 2.30 am. There were 60 of us who were taken by police to the Ghaziabad police lines and kept there till the end of the prime minister's event in Gautam Buddh Nagar," Bhartatiya Kisan Parishad leader Sukhveer Khalifa told PTI.
"We were otherwise hoping to hand over a memorandum of our demands to the prime minister. We need intervention of the prime minister or the chief minister in resolving our long pending issue with the Noida Authority," he added.
The Gautam Buddh Nagar police, however, said the action was taken as a precautionary measure.
"The detentions were made in order to prevent any untoward incident and keep the law and order in control. Police cannot allow anyone to disrupt the law and order," Additional Commissioner of Police (law and order) Love Kumar told PTI.
« Back to LIVE