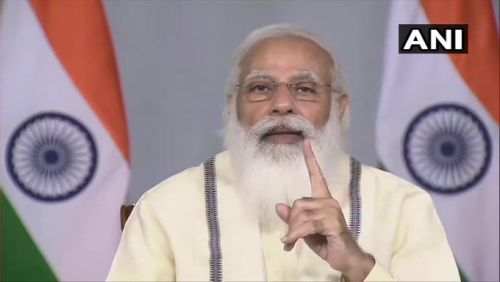 Prime Minister Narendra Modi on Tuesday held a meeting with field officials from states and districts about their experience in handling the COVID-19 pandemic.
Madhya Pradesh Chief Minister Shivraj Singh Chouhan and Karnataka Chief Minister BS Yediyurappa also attended the virtual meeting where Union Home Minister Amit Shah was present.
Office of Madhya Pradesh Chief Minister in a statement said, "Shivraj Singh Chouhan is taking part in a meeting with Prime Minister Narendra Modi on COVID19."
"You all are playing a very important role in the battle against Corona. In a way, you are the field commanders of this battle," Modi said.
"Last time, we didn't shut the farming sector. I was astonished to see how villagers were maintaining social distancing in the fields. Villages grasp the information and modify it according to their needs. This is the strength of villages," the PM added.
Office of Chief Commissioner, Bruhat Bengaluru Mahanagara Palike (BBMP) confirmed Yediyurappa's presence in the meeting.According to a statement issued by the Prime Minister's Office (PMO), officials from Karnataka, Bihar, Assam, Chandigarh, Tamil Nadu, Uttarakhand, Madhya Pradesh, Goa, Himachal Pradesh and Delhi will take part in the meeting.
"Through their interaction with the Prime Minister, the officials will share some best practices, in addition to suggestions and recommendations for continuing our ongoing battle against COVID-19, especially in semi-urban and rural areas," the statement said.
The battle against COVID-19 across various states and districts is being led at the cutting edge by field-level officials. Many of them have shown great initiative and come out with imaginative solutions.
"A better appreciation of such initiatives will help towards developing an effective response plan, targeted strategy implementation and support necessary policy interventions," the PMO said. -- ANI
« Back to LIVE