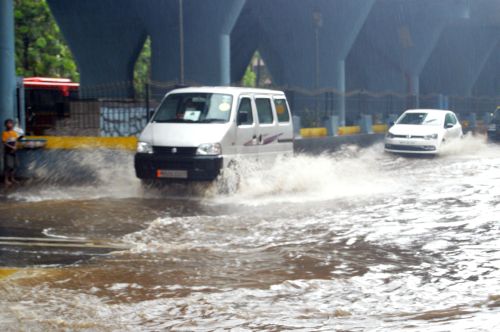 Mumbai received 230 mm rainfall due to the cyclonic storm Tauktae, with a weather expert claiming it to be the highest 24-hour downpour in May in the recorded history.
According to the India Meteorological Department's Mumbai centre, the Santacruz observatory (representative of suburbs) recorded 230.3 mm rainfall in the 24-hour period ending at 8.30 am on Tuesday.
Besides, the Colaba observatory (representative of south Mumbai) recorded 207.6 mm rain during the same period. As per the IMD's calculations, rainfall above 204.5 mm is considered as extremely heavy, "Mumbai (Santacruz): 230 mm in last 24 hrs due to cyclone effect, this is the highest 24hrs rain in Mumbai in May in the recorded history. #CycloneTauktae," Vineet Kumar, a researcher on cyclones in the north Indian Ocean at the Indian Institute of Tropical Meteorology in Pune, tweeted on Tuesday.
The IMD's head SID, Climate Research & Services at Pune, K S Hosalikar retweeted Kumar's post. Gusty winds and heavy showers lashed Mumbai and its neighbouring areas on Monday when the very severe cyclonic storm Tauktae passed close to the coast here while moving towards Gujarat. PTI
« Back to LIVE