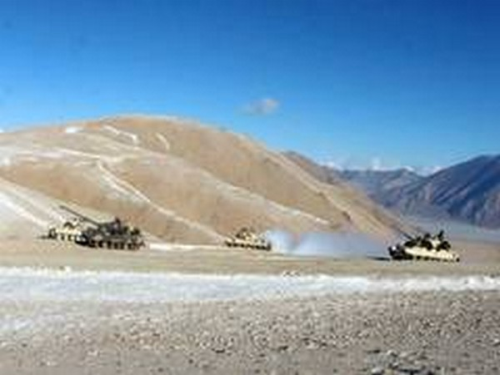 More than a year after the Chinese army displayed aggression on the northern front, the People's Liberation Army is carrying out an exercise in their depth areas near the Eastern Ladakh sector.
The Indian armed forces are also fully alert this year despite the COVId-19 pandemic and keeping a close watch on all these movements of the Chinese forces there.
"The Chinese have been coming to these areas for many years where they hold their exercises in summer time. Last year also, they had come to these areas in the garb of exercises and diverted from here towards Eastern Ladakh aggressively," sources told ANI.
The Chinese troops are well within their traditional areas with distances at some places ranging from 100 kms and beyond, they said.
Sources said the development is important as the two sides are still discussing issues related to existing friction points including hot springs and Gogra heights after the mutual withdrawal of troops from the Pangong lake area by both sides.
The Indian side has also seen summer deployment of troops at forward locations in eastern Ladakh and other sectors.
Senior officials from the forces deployed on the front have also reviewed security situation in forward areas recently and are keeping a close watch on the situation there, the sources said.
The forces deployed by the Indian side in Ladakh include the Indo Tibetan Border Police, Indian Air Force, and Indian Army which is now at the forward most locations in the sector.
« Back to LIVE