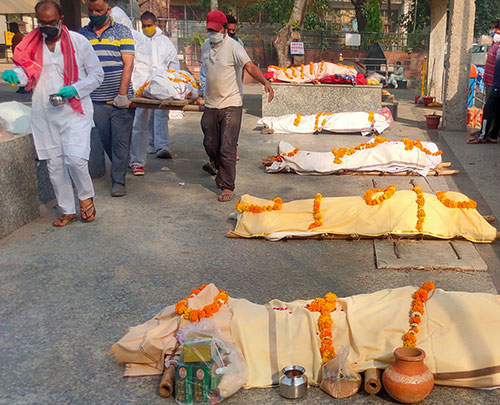 Representational image
An official of the Hisar Municipal Corporation, who ensured a dignified funeral for over 300 Covid-19 victims ever since the outbreak of the pandemic, succumbed to the disease barely two days after testing positive, a spokesperson said on Tuesday.
Praveen Kumar, 43, died at a private hospital on Monday night, the spokesperson of the municipal corporation said. Kumar was the head of the team formed by the municipal corporation to cremate the bodies of coronavirus patients.
"He had cremated over 300 COVID bodies so far since last year. He tested positive two days ago. He was admitted to a private hospital, where his oxygen level kept dipping due to which he died, the spokesperson said. Kumar was also the president of Municipal Corporation Safai Karamchari Union. His last rites were performed at a cremation ground in Rishi Nagar here on Tuesday as per the COVID guidelines.
« Back to LIVE