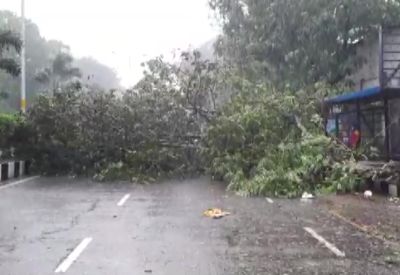 The severe cyclonic storm Tauktae lay centred about 210 km southwest of Ahmedabad and 130 km south-southwest of Surendranagar at 8.30 am and is expected to weaken gradually into a cyclonic storm during the next three hours, the India meteorological department has said.
Meanwhile, Gujarat Chief Minister Vijay Rupani held a high-level review meeting on the cyclone situation and rainfall conditions in the state, specially in the 14 coastal districts.
Six Army rescue and relief teams have been activated for rescue and relief operations in Diu while six additional Army teams have also been staged forward to Junagarh to deal with the aftereffects of the cyclone and at other places like Botad, Amreli and Bhavnagar, the Indian Army said.
Union Home Minister Amit Shah spoke to chief ministers of the cyclone-affected states -- Rajasthan, Maharashtra and Gujarat and the administrators of the Union territory of Dadra And Nagar Haveli for an update on the situation and to find out if they required any help from the Centre.
« Back to LIVE