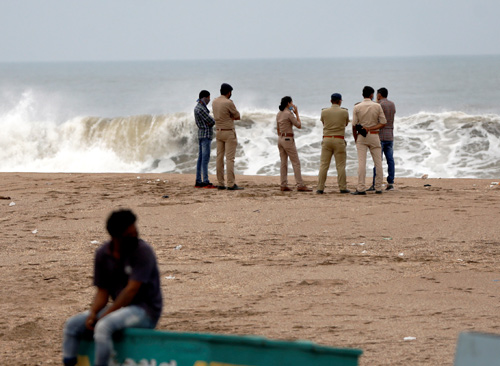 Police man the coastline at Veraval, Gujarat.
The electricity supply in Goa snapped due to the cyclonic storm Tauktae will be restored by Wednesday, the state electricity department said on Tuesday.
Most areas in Goa plunged into darkness on Sunday after high-speed winds coupled with rains uprooted transmission cables, poles and trees.
"We have managed to restore 80 per cent of the snapped electricity supply in Goa. Rest 20 per cent supply would be restored by tomorrow (Wednesday) morning," a senior official said.
He said the restoration work is going on in the state round-the-clock. "The damage caused by the cyclone is huge," the official said, adding more than 700-800 low tension poles lay broken while over 100 high tension 11 KV poles are damaged.
Besides, more than 30 Distribution Transformer Centres (DTCs) have been destroyed while the other 200 DTCs are hit by a glitch. The department is trying to re-erect four to five 33 KV towers that fell due to high-speed winds, he added. "Several electric conductors have snapped while kilometres of electricity cable has been damaged," he added. PTI
« Back to LIVE