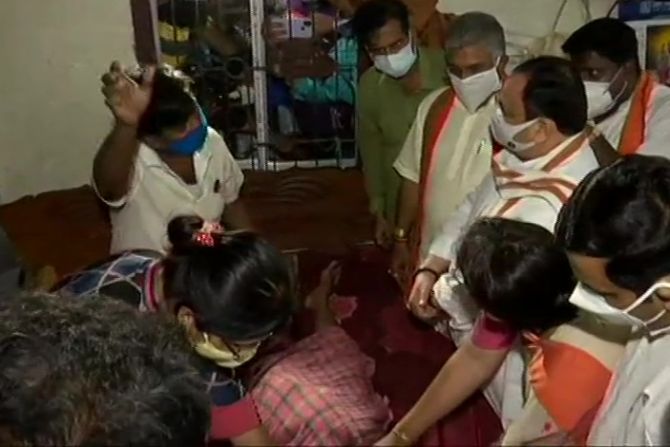 The National Commission for Women (NCW) on Tuesday said it has taken suo motu cognisance of videos purportedly showing women being beaten up in West Bengal's Nandigram after the assembly election in the state.
West Bengal was in the throes of widespread violence on Monday that allegedly left several Bharatiya Janata Party workers dead and injured in clashes, and shops being looted, prompting the Centre to seek a factual report from the state government on the incidents of attack on opposition workers.
In a letter to the director general of police (DGP) of the state, the NCW has sought immediate action against those accused in the violence, and demanded a time-bound investigation in the matter.
'The National Commission for Women (NCW) has come across several Twitter posts wherein some goons can be seen beating up women in Nandigram, West Bengal, post elections. The commission is deeply perturbed and has viewed this incident seriously as it questions the safety and security of women in the state,' a statement from the commission said.
'Chairperson Rekha Sharma has written to Director General of Police, West Bengal, to take immediate action and arrest the accused persons without any delay,' it added.
A team headed by the NCW chairperson will be visiting West Bengal for further inquiry into the matter, the statement said.   -- PTI
IMAGE: BJP chief J P Nadda meets family of party a worker who was killed in post-poll violence, in Sitala Tala Lane, Beliaghata, Kolkata. Photograph: ANI
« Back to LIVE