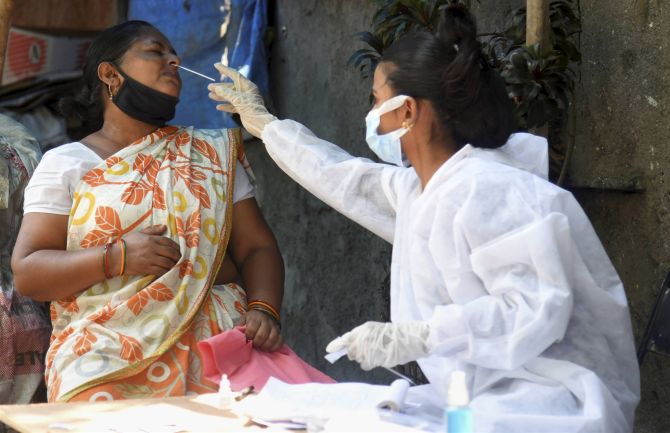 Mumbai on Tuesday reported 2,554 fresh coronavirus positive cases and 62 deaths, taking the count of infections to 6,61,420 and the toll to 13,470, an official from the Brihanmumbai Municipal Corporation (BMC) said.
This is the second consecutive day that the country's financial capital has recorded less than 3,000 cases.
As compared to Monday, the number of infections dipped by over 100 and the number of fatalities by 10.
The day before, the city had witnessed 2,662 cases and 78 deaths.
This is also the third consecutive day that the number of COVID-19 tests conducted in the city remained below the 30,000-mark.
According to the BMC, 29,076 COVID-19 swab samples were tested in the last 24 hours, taking the total number of tests administered so far to 55,42,859.
The count of recoveries in the city rose to 5,94,859 after 5,240 patients were discharged from hospitals during the day, the official said, adding that Mumbai's recovery rate has improved to 90 per cent.
As per the civic body's update, the city currently has 51,380 active cases.
According to the BMC, the city's average growth rate of COVID-19 cases went down to 0.58 per cent between April 27 to May 3, while the doubling rate improved to 116 days.
The city currently has 98 containment zones in slums and chawls while 753 buildings have been sealed, the BMC said. Mumbai had reported the highest number of 11,163 COVID-19 cases in a day on April 4.   -- PTI
IMAGE: A health worker collects swab sample for COVID-19 testing at Andheri, in Mumbai, Tuesday, May 4, 2021. Photograph: PTI Photo
« Back to LIVE