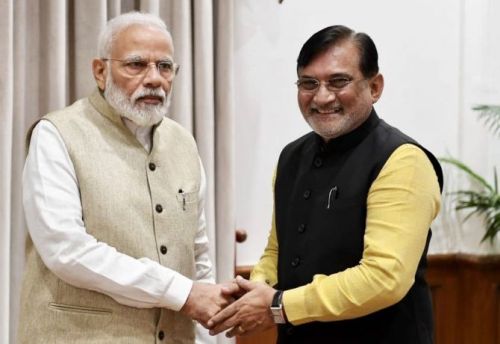 Lakshadweep administrator Praful Khoda Patel arrived to a 'Black Day' protest on the island on Monday.
The protest by political parties and organisations was to oppose his reforms measures on the isle.
Also the administrator of Dadra-Nagar Haveli and Daman- Diu, he arrived at Agatti in the afternoon commencing his week-long visit, sources said.
Soon after reaching Agatti, Patel met top officials in the administration and reviewed the progress of various development projects.
'Reached Agatti at Lakshadweep today and met with the officials. Inspected and reviewed the status of various ongoing development projects,' the administrator tweeted tagging @PMOIndia.
Earlier in the day, anticipating that the administrator would be travelling via Kochi to Lakshadweep, two Congress MPs from Kerala T N Prathapan and Hibi Eden had gone to the Kochi international airport to meet Patel to convey their protest against what they called as anti-people reforms measures on the islands.
It did not materialise as Patel reportedly opted for the Goa route to go to islands.
Meanwhile, activists of Save Lakshadweep Forum (SLF), a platform of various political parties and organisations opposing Patel's reforms, observed a black day by wearing black masks and raising black flags atop their houses.
In a Facebook post, Lakshadweep MP P P Mohammed Faizal said, "Democratic values are the highest tenets of our Constitution and any attack on the same will be fought against by the SLF."
"Witnessing a furore for over a month now, people of the archipelago have been protesting against decisions by the administrator that will affect the unique culture and tradition of our islands," he said.
He said the islanders would wear black masks and badges and protest at their residences.
"As a protest against Patels reform measures on the islands, we will also raise black flags at houses during the administrators visit. Repeal of anti-social and anti-people regulations are our prime demands. Save Lakshadweep Forum also seeks reinstatement of hundreds of people who were allegedly removed by the administration from government- related contractual jobs during Covid pandemic times," Faizal said.
The SLF raised slogans like 'Roll back all weird anti-social and anti-public reforms' and 'Praful Khoda Patel Go Back'.
Faizal said it is for the first time, Lakshadweep receives an administrator in the shades of 'black' and this day will be marked in the history of Lakshadweep in black letters.
The Lok Sabha member said no government could survive even if a small per cent of the population rose up against it.
"We hope the central government will open their eyes to our protest and will take remedial steps to ensure that Lakshadweep goes back to its normal life," he said.
Lakshadweep filmmaker Aisha Sulthana, who is in the forefront of the agitation against Patel's policies, said, "No longer will we, the people of Lakshadweep, tolerate fascism."
Sulthana, who is facing sedition charges for her alleged remarks regarding COVID-19 situation, said, "We will stand against totalitarian policies, and we will survive this siege on Lakshadweep."
The BJP had earlier alleged that false propaganda was unleashed against Patel by certain fundamental groups in Kerala as he was a former ministerial colleague of Narendra Modi when he was the chief minister of Gujarat.
Justifying the reform measures, the administration has said Maldives with the same natural beauty and similar geographical location as Lakshadweep has emerged as a great tourism location in the world map.
According to officials, three eco-friendly tourism water villa projects are being developed for tourism development by the Lakshadweep administration in collaboration with NITI Aayog on the lines of Maldives in Minicoy, Kadmat and Suheli.
The administration says with the implementation of this project, tourism would get a new dimension and tourists would get facilities for accommodation, entertainment and local people would get new opportunities for employment and business.
During his visit concluding on June 20, Patel would visit the proposed site for the sea-facing hospital in Kavaratti and review the smart city project there.
The administration has planned sea-facing hospitals in Agatti, Minicoy, Andrott and Kavaratti to boost the health infrastructure on the islands, which is about 500 km away from the mainland.   -- PTI
« Back to LIVE