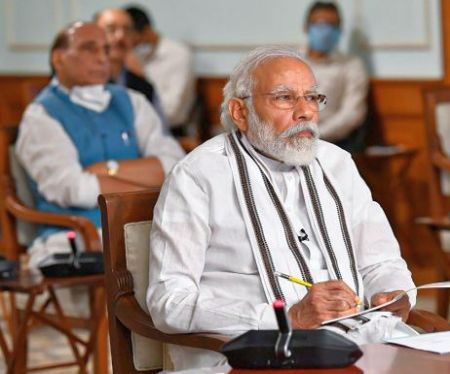 Prime Minister Narendra Modi on Monday met Union ministers, including Rajnath Singh and Nitin Gadkari, along with Bharatiya Janata Party president JP Nadda, sources said.
For the past one week, Modi has been holding in-person meetings with Union ministers apparently to take stock of the work done by the government in the last two years and to discuss various issues, they said.
Both Union ministers and Union ministers of state are meeting the prime minister in different groups.
The meeting attended by Singh, Gadkari, Union Minister D V Sadananda Gowda and Minister of State V Muraleedharan, besides others, is the fifth in the series and perhaps the last, a source said.
The sources said that BJP chief Nadda was present most of the meetings which were held at 7, Lok Kalyan Marg, the official residence of the prime minister.
Last week, Modi had met Union Home Minister Amit Shah along with Nadda and Union ministers Ravi Shankar Prasad and Jitender Singh.
Political observers and party insiders feel that this could be an exercise before an expected Cabinet expansion and reshuffle, but there has been no official word yet.
The sources said that all these meetings of the prime minister with Union ministers have lasted for nearly five hours.
Besides the work done by the ministries, Modi also discussed various important and relevant issues with them, they said, adding that the meetings were called after the second wave of Covid cases.
Cabinet ministers or ministers of state of agriculture, rural development, animal husbandry and fishing, tribal affairs, urban development, culture, statistics and programme implementation, civil aviation, railways, food and consumer affairs, jal shakti, petroleum, steel, external affairs and environment were among those who were called for the meetings, the sources said.
These meetings with the Union ministers were preceded by meetings between  Modi and presidents of various wings of the BJP and party general secretaries.
Nadda and BJP general secretary (organisation) BL Santhosh were present at the meetings with the party office-bearers.
« Back to LIVE