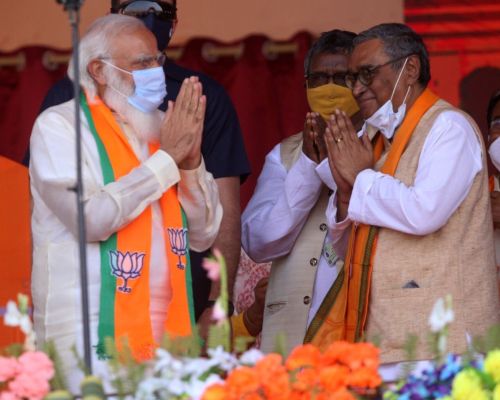 Senior BJP leader Swapan Dasgupta on Monday said it would be wrong to view everyone who joined the saffron party in West Bengal after 2019 as "Trojan horses" obliquely countering his colleague Tathagata Roys tweet hinting that former BJP national vice president Mukul Roy may have left behind agents in the saffron camp while returning to the Trinamool Congress.
"Many new entrants participated in the election with sincerity and they must not be made to feel unwelcome," Dasgupta, a Rajya Sabha MP, who had unsuccessfully contested from Tarakeswar assembly constituency, said.
Without mincing words, Tathagata Roy had tweeted after Mukul Roy crossed over to the TMC, "After having been welcomed into the BJP, he gained access to its all-India leaders, hobnobbed with state BJPs gullible... learnt all about the party and its innermost detail, he went back and leaked everything to Mamata. But what's done is done. Now the big question is, did Mukul leave back Trojan Horses within this Trojan Horse?"
Metaphorically, a "Trojan horse" refers to a trick or a strategy that causes a target to invite a foe into a securely protected bastion.
Mukul Roy, who had left the TMC to join the BJP in 2017, returned to the ruling party on Friday and many others have already expressed a desire to return to their old party from the saffron camp.
Alluding to the insinuations by the former Meghalaya governor that there could be agents planted by Roy in the BJP, the journalist-turned-politician posted on Twitter, "Politics is not a game of exclusion; it involves adding support & creating new leaders".
« Back to LIVE