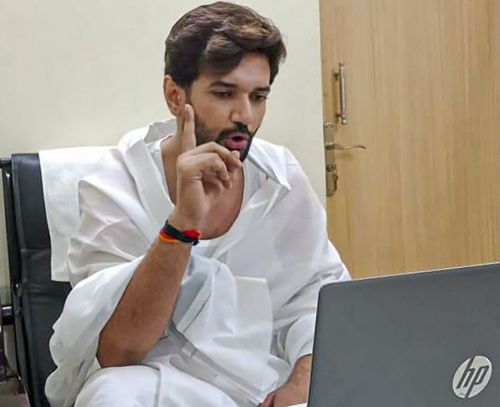 Bihar Chief Minister Nitish Kumar's JD(U), which bore the brunt of Chirag Paswan's brinkmanship in the assembly polls last year, on Monday said the LJP president was reaping what he had sown.
JD(U) national president RCP Singh reacted with a sense of vindication to the developments in the party founded by late Ram Vilas Paswan, whose son has been left cornered in a revolt led by the former's younger brother Pashupati Kumar Paras and supported by four other MPs, including nephew Prince Raj.
"It is a well known adage that as you sow, so you reap. Chirag Paswan was heading a party which was with the NDA. Yet, he adopted a stance that damaged it in the assembly polls. This led to a sense of unease within his own party," Singh told reporters.
Chirag Paswan had opened a front against Nitish Kumar in the elections, fielding nominees against all JD(U) candidates, many of them rebels from the BJP. He had claimed that he wanted to help the saffron party form its own government in the state where the people yearned for a change in leadership.
Although the NDA managed to secure a majority and Kumar was backed for another term, the JD(U) ended up with a much smaller tally, conceding the upper hand to the BJP, which now has the lion's share in the council of ministers in Bihar two of them being deputy CMs.
Asked about the praise showered on Nitish Kumar by Pashupati Kumar Paras, who represents the Hajipur seat from where Ram Vilas Paswan was elected for most of his career, Singh said "he was a minister in the state cabinet until he got elected to Parliament. We shared extremely cordial relations". The JD(U) chief also remarked that Chirag was "too young" and had failed to keep his flock together in the LJP, which owed its current standing, in a large measure, to "efforts put in by Pashupati Kumar Paras and Ram Chandra Paswan (Prince Raj's late father)".
Singh, however, parried queries as to whether the rebel LJP MPs would be welcome if they expressed the wish to join JD(U).
« Back to LIVE