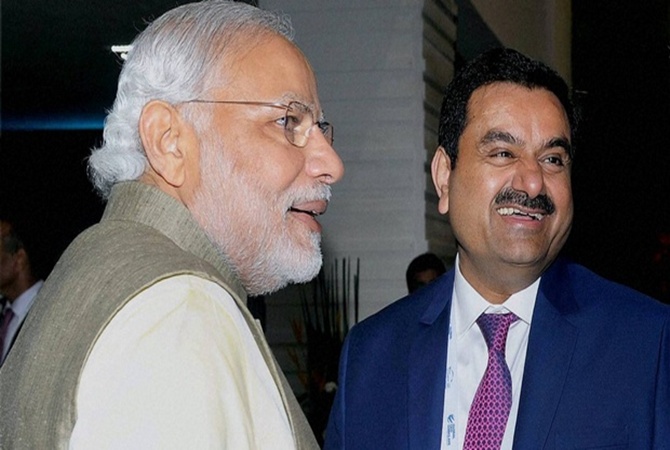 File pic: PM Modi with Gautam Adani
Shares of the Adani Group companies witnessed a massive drubbing in morning trade on Monday, tumbling up to 25 per cent, amid reports that the National Securities Depository Ltd (NSDL) has frozen certain FPIs accounts that have holding in some of these firms.
Adani Enterprises tumbled 24.99 per cent to Rs 1,201.10, Adani Ports and Special Economic Zone plummeted 18.75 per cent to Rs 681.50 on the BSE.
Among others, Adani Green Energy dipped 5 per cent to Rs 1,165.35, Adani Total Gas fell 5 per cent to Rs 1,544.55, Adani Transmission declined 5 per cent to Rs 1,517.25 and Adani Power slumped 4.99 per cent to Rs 140.90.
All these stocks hit their respective lower circuit limits. According to media reports, the National Securities Depository Ltd has frozen the accounts of three foreign funds which together own shares in four Adani Group companies. These accounts were frozen on or before May 31, the report added. PTI
« Back to LIVE