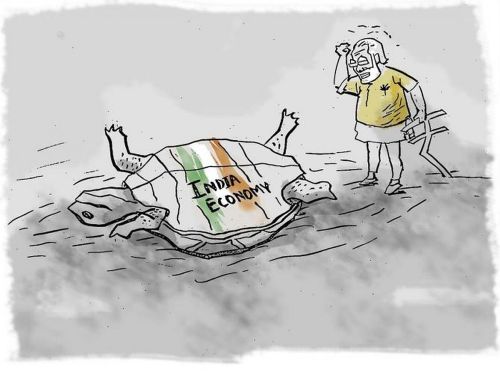 The Indian economy has turned turtle under Modi
Consumer anxiety is at the highest levels since the outbreak of coronavirus pandemic in India with the less affluent most skeptical about economic outlook while a majority of consumers think their income in the next six months will be lower than the pre-COVID levels, says a latest study.
As per the COVID-19 consumer sentiment research by global management consulting firm Boston Consulting group (BCG) conducted between May 23 and May 28, 2021, covering around 4,000 respondents across metros, tier I, II, III, IV and rural India, 51 per cent of consumers expected their spends over the next six months to be lower.
In the last round of survey conducted from July 20 to August 2, 2020, the figure stood at 40 per cent. As many as 83 per cent of the respondents agreed that coronavirus posed a high level of threat to their jobs or businesses, while another 86 per cent felt that there would be an economic recession due to the pandemic.
In terms of income outlook, 58 per cent of the respondents expected a decline in income in the next six months, the study said adding the decline in income sentiment is the steepest among less affluent/small towns. It found that 76 per cent of respondents in the 'struggler/next billion' category expected income lower than the pre-COVID level, while the same was also true for 60 per cent in the 'aspirer' segment.
However, only 49 per cent 'affluent/elite' expected decline in income in the next six months. The less affluent were also the most skeptical about economic outlook, although health concerns were prevalent across consumer profiles. The impact of the pandemic on daily lifestyles were felt more in urban/affluent India, the study said.
« Back to LIVE