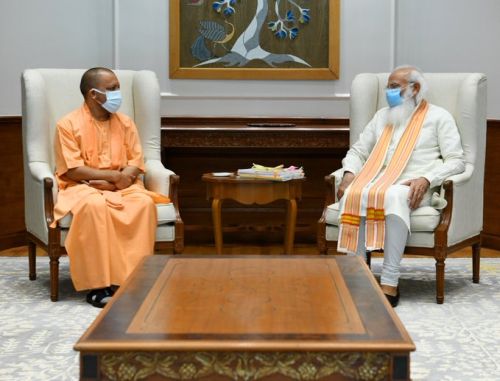 The UP CM and the PM this morning
Uttar Pradesh Chief Minister Yogi Adityanath arrives at the residence of BJP president JP Nadda in New Delhi.
Adityanath had called on Prime Minister Narendra Modi earlier this morning.
Adityanath met Modi at his residence, a day after meeting Union Home Minister Amit Shah. The chief minister is on a two-day visit to the national capital from Thursday.
His visit comes close on the heels of the party holding a series of review meetings in Lucknow, which had fuelled speculation of a ministerial reshuffle in the state.
During his meeting with Shah, Adityanath presented a copy of the report 'Solution of Migrant Crisis'. His visit to the national capital started a day after Jitin Prasada quit the Congress and joined the BJP.
After Adityanath met Shah, Prasada called on the Uttar Pradesh chief minister here. BJP MLC A K Sharma, a former IAS officer who is seen as a trusted hand of Modi, is also in Delhi to meet party leaders and allies.
Though there is no official word on whether there will be a Cabinet expansion in Uttar Pradesh, sources said Prasada, who comes from a noted Brahmin family of the state with political heft, and Sharma may be accommodated in such an eventuality.
« Back to LIVE