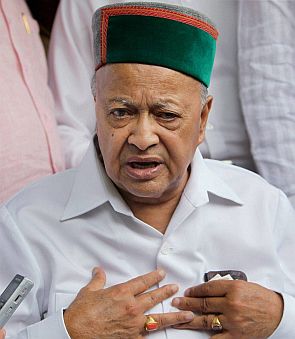 Former Himachal Pradesh chief minister Virbhadra Singh has tested positive for Covid-19 for the second time in two months, a health official said on Friday.
The veteran Congress leader had earlier tested positive for the disease on April 12.
He is being treated at Indira Gandhi Medical College (IGMC) hospital, Shimla, and his condition is stable, Special Secretary (Health) Nipun Jindal said.
Nine-time MLA and five-time MP, Singh was Himachal Pradesh's chief minister for six terms.
The 86-year-old veteran Congress leader is currently the MLA from Arki in Solan district.
Earlier, he was admitted to a hospital in Chandigarh after he tested positive for coronavirus on April 12. Singh returned home in Holly Lodge in Shimla on April 30 from the Chandigarh hospital after recovering from Covid-19.
However, within hours after reaching home, he was admitted to IGMC when he complained of cardiac and breathing problems. Since then he is being treated at the hospital.
« Back to LIVE

Singapore-born Tim David is a towering finishing batsman but might be more remarkable for being the only player in the Australian squad without a state or national contract.

The counting of votes will take place on November 6, the poll panel said in a statement.

Svante Paabo has established an entirely new scientific discipline, paleogenomics. By revealing genetic differences that distinguish all living humans from extinct hominins, his discoveries provide the basis for exploring what makes us...

Indian Air Force fighter jets were scrambled to intercept a foreign aircraft with its origin in Iran that was moving towards New Delhi's airspace.