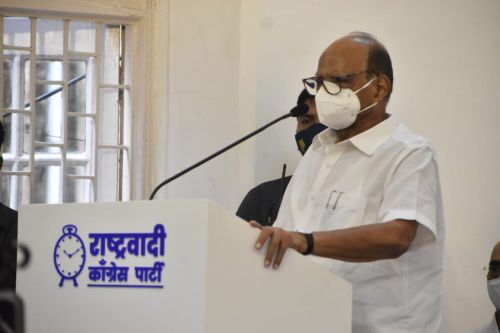 Political strategist Prashant Kishor on Friday called on NCP president Sharad Pawar at the latter's residence in Mumbai and held talks with him for around three hours, setting tongues wagging in political circles.
NCP sources said apart from discussing the prevailing political situation, Pawar hosted lunch for Kishor. The meeting got over by around 2 pm, but neither Kishor nor Pawar spoke to the mediapersons gathered outside 'Silver Oak' (NCP chief's residence).
This is Kishor's first meeting with Pawar after the victory of the DMK and the TMC in the assembly elections in Tamil Nadu and West Bengal respectively. He had helped craft the election strategy for these parties in the assembly elections. After the assembly poll results, the election strategist had said that he was "quitting this space".
Maharashtra Deputy Chief Minister Ajit Pawar downplayed the meeting, saying that Kishor has already said he will not be a political strategist any more.
Shiv Sena leader Sanjay Raut said many leaders are in touch with Kishor, while NCP's Chhagan Bhujbal said he was no aware of the agenda of the meeting. Stating that Kishor was a successful political strategist, Bhujbal said he was sure that Pawar will take into account Kishor's suggestions. Kishor had met Uddhav Thackeray in 2019 before the latter became chief minister. PTI
« Back to LIVE