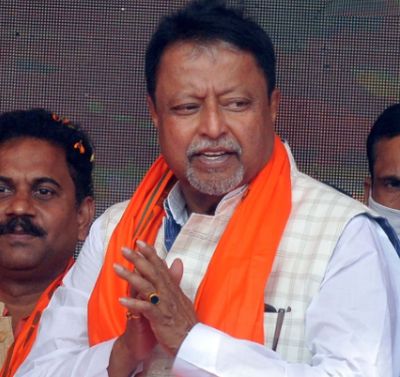 Bharatiya Janata Party national vice-president Mukul Roy is likely to return to Trinamool Congress, news agency ANI reported.
The final decision regarding Roy's joining will only be taken after his meeting today with the TMC top brass in Kolkata, the agency added.
Roy, who was once considered the number two in the TMC, defected to the BJP in 2017.
« Back to LIVE

A halogen light at the pandal overheated, causing an electric wire to catch fire at multiple points simultaneously. Soon the fire engulfed the wooden scaffolding and the tent, Rathi said.

The announcement from the hospital comes a day after the Samajwadi Party on Sunday said its 82-year-old patriarch's health had deteriorated.

'Walking is the loudest statement.' 'When someone says, I control everything and no one can oppose me, there are thousands of people on the streets saying no, we oppose you -- this is a very bold statement.'