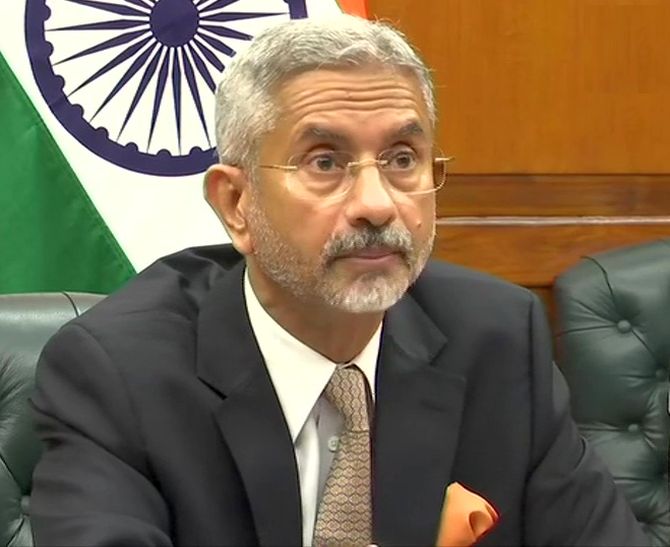 Indian External Affairs Minister S Jaishankar on Thursday assured the worried diaspora in Kuwait that the second wave of COVID-19 was receding in India and the government 'really moved mountains' to contain the pandemic.
Jaishankar, who arrived here on his first bilateral visit to the oil-rich Gulf nation early on Thursday, addressed the Indian community in  Kuwait City at the conclusion of his meetings in the country.
"The second wave of the COVID-19 has started to recede. The daily number of new infections is less than what it was in early May. The positivity rate has also come down dramatically," he said.
"A large part of it has been made possible by very very vigorous government response to the second wave. The kind of effort and energy that I saw, the long hours that people put in. People really moved mountains to respond to what was an unprecedented situation," he said.
The minister said the government ran hundreds of oxygen trains to ferry oxygen from the production centres to the major cities.
"All our planes were mobilised, including the Air Force planes for the oxygen cylinder tanks to be moved, both within the country and from abroad to India," Jaishankar said.
"We procured medicines which were essential for COVID treatment. Many of them came from abroad. We also ensured the domestic production of the medicines was enhanced," he said.
On the vaccination programme, the minister acknowledged that it was a 'big issue' and 3 million people were being vaccinated daily and its pace will pick up in the coming days.
"As the production of the vaccines scales up, as the year progresses, we will be able to vaccinate all our people," he said.
Jaishankar said the economy has started to make a strong recovery, asserting that there is a sense that the economic impact of the second wave would be less than what happened in the last year.
"The belief we have is that India will pick up. India will recover rapidly, a lot of what we have seen in the past -- the steady rise of India and its economy and influence in the world -- and that will continue," he said.
Jaishankar lauded the contributions of the Indian community, saying it in many ways defines India abroad.
"The contribution you make, the respect you earn, the support that you provide and the bridge you constitute is what makes India's interaction with the world unique... Keep the Indian flag flying high here in Kuwait," he said.
Earlier, Jaishankar held a meeting with India's envoys to the Gulf nations to discuss a host of issues, including encouraging speedy resumption of flights to this region and facilitating reuniting families separated by COVID disruption.
He said the Indian missions in the crucial Gulf region have been told to do whatever they could to help the Indian community during the pandemic.
He said the government attached high importance to the region not only because it was one of the main sources of oil and gas for the country but also due to the presence of a large number of Indian nationals living in countries in the region.
Jaishankar said he held 'productive discussions' with his Kuwaiti counterpart Sheikh Ahmed Nasser Al-Mohammad Al-Sabah on Thursday during which the two sides discussed a range of issues including health, food, education, energy, digital and business cooperation.
During the visit, India and Kuwait also signed an MoU that brings Indian domestic workers in the Gulf nation within the ambit of a legal framework that streamlines their recruitment and provides them with the protection of the law.
The MoU brings the Indian domestic workers in Kuwait within the ambit of a legal framework that streamlines their recruitment and provides them with the protection of the law.
Around one million (ten lakh) Indians reside in Kuwait.  -- PTI
« Back to LIVE