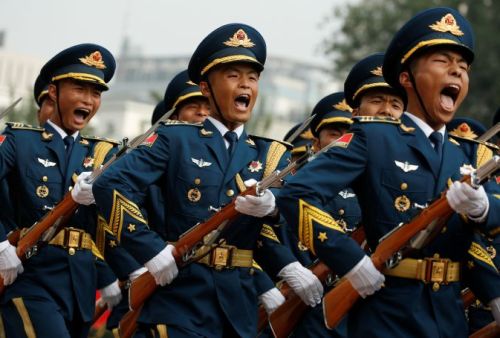 Describing China as a pacing challenge, United States Defence Secretary Llyod Austin said Beijing's "aggressive behaviour" in the Indo-Pacific could spark a crisis in the region.
Responding to questions from members of the Senate Armed Services Committee during a Congressional hearing on the annual budget of the Pentagon, he stressed on having a direct line of communication between the militaries and also between government officials.
"As we look at some of the aggressive behaviour that we have witnessed from China in the Indo-Pacific, I'm concerned about something that could happen that could spark a crisis," Austin said on Thursday.
"We need the ability to be able to talk with our allies and partners and also with our adversaries or potential adversaries. So, I think there needs to be a direct line of communication between the military and also between government officials as well," the defence secretary said.
Austin described the US' relationship with China currently as one of competition.
"They desire to be the preeminent country on the planet. Their mid to long-term goal is to do that. They look to compete with us, not only militarily but across a spectrum of activity," he said.
"What you see us doing, the military and other sectors in our government, is making sure that we remain competitive, economically; making sure that we continue to develop the best scientists in the world and the most comprehensive research. So it is a competition across a broad spectrum of activity," Austin said.
During the Senatorial hearing, Senator Angus King said that he believed one of the "most serious risks the US faces today is an accidental conflict with China", of some kind of conflict in the South China Sea, the Strait of Taiwan, and the danger of escalation from that accidental conflict of some kind.
"It's concerning to me that we don't seem to have an effective hotline with China. I understand the Chinese are reluctant about this, but I believe this should be a national security priority," King said.
Austin described China as a pacing challenge for the United States.
"China is our pacing challenge. So we've really weighted our main effort there to the Indo-Pacific region. My first trip overseas was out to the region, along with Secretary of State Antony Blinken. We visited South Korea, Japan, and India as well," he said.
"We truly value the importance of strong relationships with our allies and partners. I think there's a great capacity that can be leveraged there. So, in some areas through those partnerships, while still strong, we will remain focused on that," he said. -- PTI
« Back to LIVE