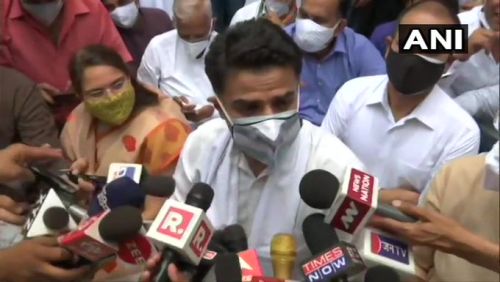 Sachin Pilot
Former Rajasthan deputy chief minister Sachin Pilot on Friday refuted claims made by BJP leader Rita Bahuguna Joshi that she had spoken to him about joining the saffron camp.
"Rita Bahuguna Joshi claimed that she had spoken to Sachin. She might have spoken to Sachin Tendulkar. She does not have the courage to speak to me," Pilot told reporters during a protest organised by the Congress in Jaipur against fuel price hike.
Joshi told a TV channel that she had spoken to Pilot about joining the BJP. Pilot's statement came amid reports of his discontentment with the Congress leadership.
The Congress leader had openly revolted against the leadership of Chief Minister Ashok Gehlot in July last year, and after a month-long political crisis, the party high command assured him of resolving the issues raised by him and formed a committee.
The Pilot camp, however, says that the issues are unresolved and nothing was done by the committee. In the protest outside a petrol pump in the Sanganer area, Pilot targeted the central government over inflation and hike in fuel prices. "Economic slowdown, inflation and unemployment have hit the country hard during the coronavirus pandemic. People have lost jobs and labourers are not getting wages," he said.
"It is very sad that lakhs of people died, dead bodies were thrown in rivers and every family struggled with the coronavirus, and in such a situation, the government is not taking any step to control inflation and instead, increasing fuel prices," Pilot added. He said the prime minister had to roll back his decision on vaccination and announce free inoculation for all under pressure from the Congress.
« Back to LIVE

A halogen light at the pandal overheated, causing an electric wire to catch fire at multiple points simultaneously. Soon the fire engulfed the wooden scaffolding and the tent, Rathi said.

The announcement from the hospital comes a day after the Samajwadi Party on Sunday said its 82-year-old patriarch's health had deteriorated.

'Walking is the loudest statement.' 'When someone says, I control everything and no one can oppose me, there are thousands of people on the streets saying no, we oppose you -- this is a very bold statement.'