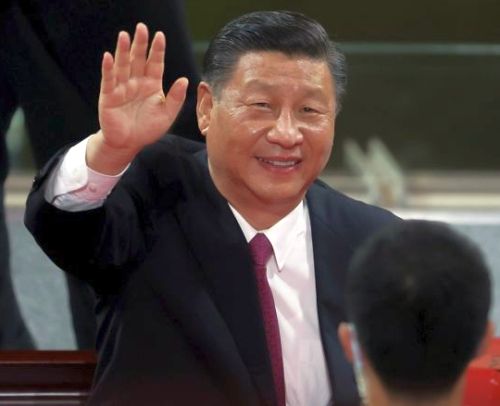 Chinese President Xi Jinping visiting Tibet last week is a threat to India, an influential  United States lawmaker has said, accusing the Joe Biden-led administration of not doing enough to stop the Chinese "march".
Xi on Wednesday last made an unannounced three-day trip to Nyingchi in Tibet, close to the border with Arunachal Pradesh.
Xi, who is also General Secretary of the Communist Party of China, met top officials of the Tibet Military Command and reviewed development projects in the region.
In an interview to Fox News, Republican Congressman Devin Nunes said: "Just last week, you had Xi Jinping, the Chinese dictator, on the border with India, in Tibet, claiming victory. This was the first time in 30 years, I believe, that a Chinese dictator had been to Tibet, and also threatening India, over a billion people also a nuclear power; threatening India that he's going to build a big water project, possibly cut off water to India."
During his visit to Nyingchi, Xi visited the Nyang River Bridge to inspect the ecological preservation in the basin of the Brahmaputra river, which is called Yarlung Zangbo in Tibetan language.
China this year approved plans to build a huge dam over the Brahmaputra river during the current 14th Five-Year Plan, which raised concerns in the riparian states of India and Bangladesh.
"So, no matter what you plug into the propaganda machine, you can build all the narratives you want here in Washington, D.C., but then there's reality. The reality is that the Chinese are on the march, and the (President Joe) Biden administration is letting them do whatever they want," Nunes said.
A senior Republican in the House of Representatives representing the 42nd Congressional district of California, Nunes was the chairman of the powerful House Intelligence Committee from 2015 to 2019.
Xi's visit to Tibet took place amidst the current India-China military tensions in eastern Ladakh.
India and China have been locked in a military standoff at multiple friction points in eastern Ladakh since early May last year.
China claims Arunachal Pradesh as part of South Tibet, which is firmly rejected by India. The India-China border dispute covers the 3,488-km Line of Actual Control (LAC).
China is accused of suppressing cultural and religious freedom in Tibet. China has rejected the accusations.
Since becoming President in 2013, Xi has pursued a firm policy of stepping up security control of Tibet. Beijing has been cracking down on Buddhist monks and followers of the Dalai Lama, who despite his exile remains a widely admired spiritual leader in the remote Himalayan region. -- PTI
« Back to LIVE