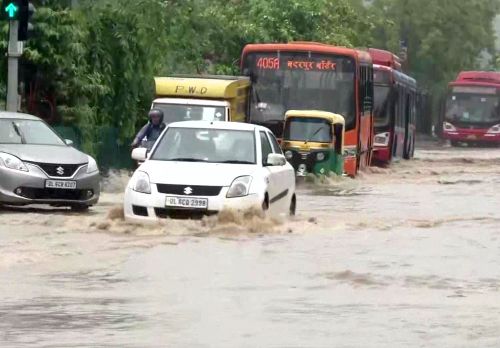 In a relief to Delhiites from sultry weather conditions, several parts of the national capital received incessant rainfall on Tuesday morning.
However, the heavy downpour has caused water-logging in several parts of Delhi.
According to the India Meteorological Department's prediction on Tuesday morning, a thunderstorm with light to moderate intensity rain is likely in many parts of Delhi and Haryana and Rajasthan.
"Thunderstorms with light to moderate intensity rain would occur over many places of North-west Delhi, Central Delhi, South-Delhi, Southwest-Delhi, Gurugram, Manesar, Sohna, Bhiwadi, Bawal, Narnaul, Kosli, Rewari, Nuh, Manesar (Haryana), Tizara, Alwar, Rajgarh, Deeeg, Nagar, Khairthal, Mehndipur, Mahwa, Lachmanngarh, Nadbai (Rajasthan) and adjoining areas during the next 2 2 hours," tweeted IMD at 5.26 am.
Sultry weather troubled the national capital with maximum temperature recorded at 33.1 degrees Celsius on Monday and 37.3 degrees Celsius on Sunday. -- ANI
« Back to LIVE