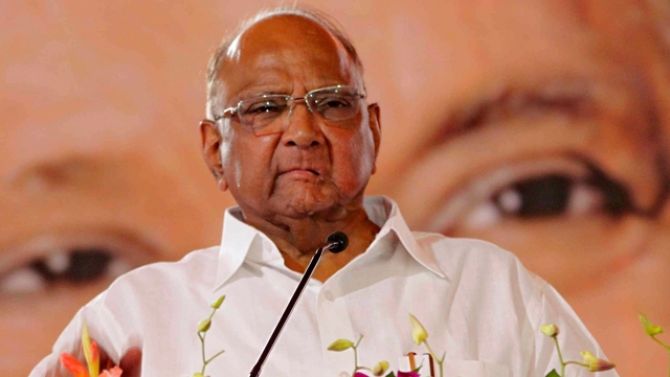 NCP chief Sharad Pawar on Tuesday said he is likely to meet West Bengal Chief Minister Mamata Banerjee on Wednesday in New Delhi, where the TMC head will hold parleys with opposition leaders to explore ways to cobble together an alliance of anti-BJP parties ahead of the 2024 Lok Sabha polls.
Banerjee arrived in Delhi on Monday on her first visit to the national capital since assuming office as the West Bengal CM for a third term and is expected to meet Prime Minister Narendra Modi and President Ram Nath Kovind.
The Trinamool Congress (TMC) supremo, who apparently seeks to take up a larger role in national politics prior to the 2024 Lok Sabha elections, is also scheduled to meet Congress chief Sonia Gandhi and a host of other leaders from opposition parties.
Responding to a question in this context by reporters, Pawar, whose party shares power with the Shiv Sena and Congress in Maharashtra, said, "She called me last week and told me about her visit to New Delhi and her willingness to meet. I think we are likely to meet tomorrow in New Delhi."
The former Union minister, however, refused to comment on the Pegasus snooping controversy. "This is not the time and place to say anything about it. We will raise the issue at the right place-in Parliament. We will try to raise it there," he said.
« Back to LIVE