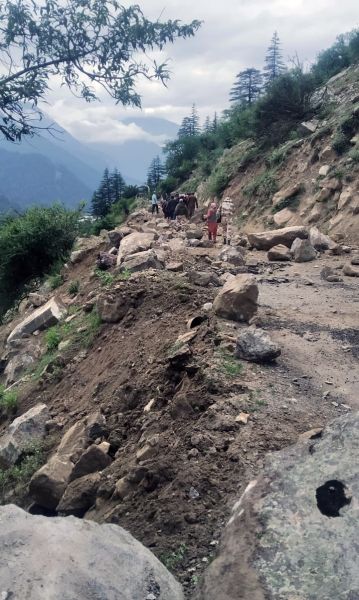 The landslide at Badseri village, Kinnaur
About 60 to 80 tourists have been stranded in two villages of Himachal Pradesh's Kinnaur district after multiple landslides on July 25 blocked roads, a senior official said on Tuesday.
"These tourists are stranded in Chhitkul and Rakshak, the last villages of the Bapsa valley, as the Sangla-Chhitkul road had been closed for traffic after the landslides," Kinnaur Deputy Commissioner Abid Hussain Sidiq said. The district administration is facing difficulty in clearing the heavy boulders from the road.
"The owners of apple orchards are objecting to the boulders being dumped near their orchards located down the road," he said.
Sidiq said he hoped the road would be opened for traffic by Tuesday evening.
Nine tourists were killed on Sunday after heavy boulders fell on their tempo traveller near Basteri in Kinnaur. Multiple landslides triggered by rains occurred near Basteri on the Sangla-Chitkul road, resulting in the collapse of a bridge and damage to some vehicles. PTI
« Back to LIVE