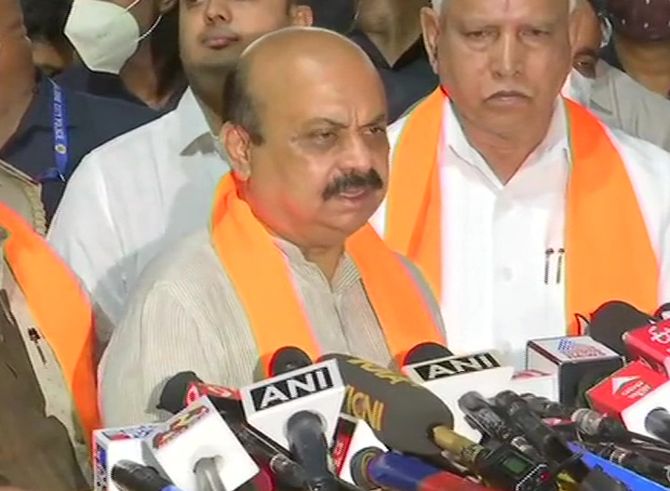 Chief Minister-designate Basavaraj Bommai on Tuesday said he would strive to offer relief to people affected by COVID-19 and floods and improve the economic condition of Karnataka, hit hard by the pandemic.
"I will work day and night to offer relief to the people in distress due to COVID or the recent floods. I will initiate all steps to improve the economic condition of the state in the coming days," he told reporters.
Following torrential rains, parts of the state had witnessed floods in recent days.
Soon after he was elected as the new leader of the Bharatiya Janata Party Legislature Party, Bommai thanked the BJP leaders, especially Prime Minister Narendra Modi, Home Minister Amit Shah and outgoing Chief Minister B S Yediyurappa who reposed faith in him to lead the state.
He said he would work hard to live up to the expectations of the prime minister and Yediyurppa on the development front.
"I will win everyone's trust with the help of my cabinet colleagues and my party workers," Bommai said.
He said the seniors in the party have blessed him and he would take everyone along.
Yediyurappa resigned on Monday, coinciding with his government completing two years in office.
Meanwhile, news of Bommai set to becoming the next chief minister triggered celebrations in Shiggaon town in the district headquarters of Haveri.
Shiggaon is from where Bommai got elected to the Karnataka assembly.
Bommai's supporters hit the roads, burst crackers and raised slogans in favour of their leader.   -- PTI
« Back to LIVE