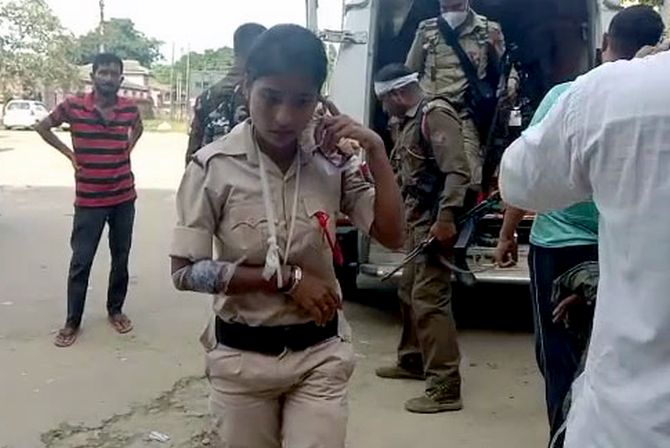 The Centre has called a meeting of the chief secretaries and directors general of police (DGPs) of Assam and Mizoram on Wednesday in the wake of violence along their shared border, where five Assam Police personnel were killed, officials said.
Union Home Secretary Ajay Bhalla will chair the meeting to discuss the sudden escalation of violence along the Assam-Mizoram border.
The meeting of the chief secretaries and DGPs is expected to work on a peace formula so that there is no repeat of the violence along the border of the two states, a home ministry official said.
The central government is in regular touch with the Assam and Mizoram governments and trying to calm down the situation, the officials said, adding the Central Reserve Police Force has been deployed in the violence-hit area.
Five Assam Police personnel, along with a civilian, were killed and more than 50 others, including a Superintendent of Police, were injured when Mizoram Police opened fire on a team of Assam officials on Monday.
Assam's Barak Valley districts of Cachar, Karimganj and Hailakandi share a 164 km long border with Mizoram's three districts of Aizawl, Kolasib and Mamit.
After allegations of encroachment of territory by both sides over the past few weeks and skirmishes that escalated tensions between the two states, violent clashes were reported along the inter-state border that ended in the death of five Assam policemen and a civilian.
The incidents came two days after Home Minister Amit Shah held talks with the chief ministers of eight northeastern states and underscored the need to resolve lingering border disputes.   -- PTI
IMAGE: Injured police personnel at Lailapur Hospital for treatment after violence broke out at the disputed Assam-Mizoram border, in Cachar district on Monday. Photograph: ANI Photo
« Back to LIVE

Benchmark BSE Sensex settled above the 63,000-level for the first time on Wednesday, extending its winning momentum to seventh day amid a largely positive trend in global markets and continuous foreign fund inflows.

Iran's World Cup campaign was all but finished even before it started.