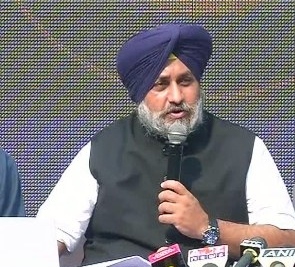 Regional parties should come together and form a national front to take on the Bharatiay Janata Party in the 2024 Lok Sabha elections, Shriomani Akali Dal president Sukhbir Singh Badal said on Sunday and asserted that his party's story with the saffron party was over.
Underlining that issues of farmers are at the core of the SAD ideology, Badal said his party can never compromise on these and, therefore, severed its decades-old alliance with the BJP and moved out of the government at the Centre over three contentious farm laws.
"The SAD is a farmers' party and their issues are core of our ideology. Whatever may happen and whatever cost we may have to pay, we wouldn't let these laws be implemented in Punjab," Badal told PTI in an interview.
The Centre's three farm laws have triggered a protest by farmers.
In September last year, Badal's wife Harsimrat Kaur quit as Union minister in protest against the legislations.
The protesting farmers claim these laws will do away with the minimum support price system, leaving them at the mercy of big corporations. Over 10 rounds of talks with the government, which has been projecting the laws as major agricultural reforms, have failed to break the deadlock between the two sides.
Talking about the SAD's new alliance with the Mayawati-led Bahujan Samaj Party (BSP), Badal said the alliance between the two parties is permanent and that the Akali Dal's story with the BJP was over.
On the party's future course of action, Badal said that the SAD is talking to various regional parties so that they all can come on one platform before the 2024 general elections.
"There is a need for regional forces to get together. Regional forces are more connected to the ground and have better understanding of the people. We have been talking to various parties. Regional parties should come together and form a front before the 2024 general elections. And I am sure before 2024 this front will emerge as very strong force," he said.
Badal further said it would be a second front rather than a third front as the main opposition Congress is no more a pan-India party. The BJP will be the new front's main target. -- PTI
« Back to LIVE