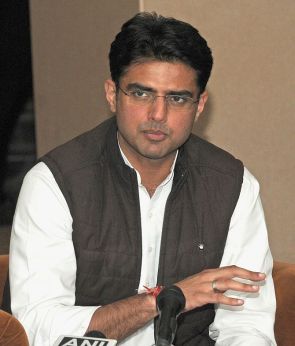 Congress leader Sachin Pilot said on Sunday that his party alone can politically challenge the Bharatiya Janata Party and provide an alternative to people.
Talking to reporters in his Tonk assembly constituency, the former deputy chief minister of Rajasthan also targeted the Modi government over alleged shortage of coronavirus vaccine.
India is the hub of vaccine manufacturing but the government has failed to ensure supply of doses in adequate quantity for inoculation of people, he said.
"People are suffering from inflation and they want change. Congress is the only political party which can challenge the BJP and give an alternative to people," he said.
Asked about his expectations from a likely reshuffle of the Rajasthan Cabinet and organisational rejig, Pilot said such issues are discussed at the right platform within the party.
"AICC (All India Congress Committee) general secretary in charge of Rajasthan Ajay Maken has held a meeting of PCC (Pradesh Congress Committee) today and has talked in detail. Nothing is left to say now," he said.
During his visit to Tonk, Pilot held a meeting with district administration and police officials and discussed various issues.
Earlier in the day, Pilot attended the PCC meeting which was addressed by Maken and senior leader K C Venugopal.
Maken and Venugopal also held discussions about the Cabinet expansion and political appointments with Chief Minister Ashok Gehlot Saturday night. -- PTI
« Back to LIVE