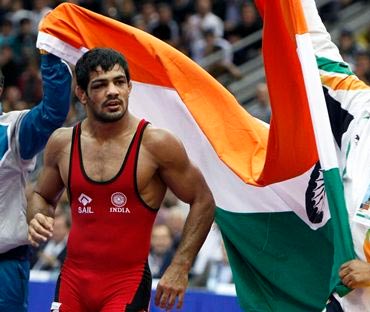 Sushil Kumar won a bronze at the Beijing Olympics
Delhi Prison authorities on Thursday allowed two-time Olympic medallist Sushil Kumar, lodged in Tihar jail in connection with the Chhatrasal Stadium brawl, to watch television in the common area of his ward ahead of the Olympic games, which is set to begin on July 23, officials said. On July 2, Kumar through his advocate had urged prison authorities to provide him a television to remain updated about wrestling matches and other happenings outside the jail. The COVID-hit Olympic games will begin at Tokyo in Japan on July 23. Director General (Delhi Prisons) Sandeep Goel said, "We have allowed Sushil Kumar to watch television in the common area of his ward along with others since the Olympics is set to begin from tomorrow.
"He has made a request through his lawyer for a TV to stay updated about wrestling matches and other happenings." Kumar was arrested along with co-accused Ajay Kumar on May 23 from outer Delhi's Mundka area. He and his associates allegedly assaulted wrestler Sagar Dhankar and two of his friends Sonu and Amit Kumar on the intervening night of May 4 and 5 over a property dispute.
Dhankar, 23, succumbed to injuries later. Kumar, who is facing charges of murder, culpable homicide and kidnapping, was shifted to Tihar jail number 2 from Mandoli jail where he was lodged earlier. -- PTI
« Back to LIVE