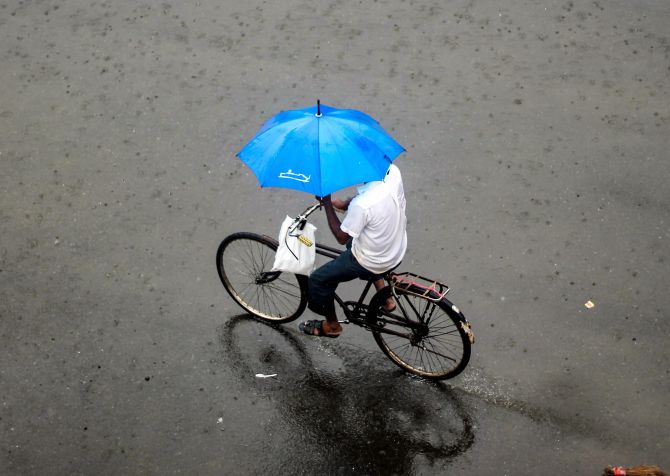 Mumbai received heavy showers intermittently on Wednesday though trains and road traffic were not affected, civic officials said.
The train traffic between Khardi and Igatpuri stations of the Central Railway was suspended due to water logging between Umbermali and Kasara stations in neighbouring Thane district since 10.15 pm, said a railway spokesperson.
Two long-distance trains -- Pune-Darbhanga special and CSMT-Varanasi special -- had to be rescheduled, said Shivaji Sutar, chief spokesperson of the Central Railway.
Kasara, 102 km from Mumbai, recorded 207 mm of rain till 10 pm since last midnight, 45 mm of it in the last one hour.
As per the Brihanmumbai Municipal Corporation (BMC), the island city area of Mumbai recorded 68.72 mm of rain, eastern suburbs 58.75 mm and western suburbs 58.24 mm of rain in 10 hours since 8 on Wednesday morning.
The intensity of rainfall dipped in the afternoon but increased again at night, it said.
Earlier in the day, the Regional Meteorological Centre of the IMD had issued a 'red alert' for Mumbai, predicting heavy to very heavy rainfall in the country's financial capital.
Heavy rains had battered the metropolis on Sunday and Monday.
There is an off-shore trough running between Maharashtra and Karnataka, which generally carries moisture-laden westerly winds from the Arabian Sea to land, a met official said.
In addition to it, there is an east-west 'shear zone cutting across Maharashtra' and it has been adding to the prevailing favourable monsoon conditions, he said.
These two synoptic systems are leading to very heavy rain over Konkan, Goa and central Maharashtra, especially the Ghat areas, the official said.   -- PTI
IMAGE:  A man holds an umbrella as he rides a bicycle during rain at Bandra in Mumbai, on Wednesday. Photograph: PTI Photo
« Back to LIVE