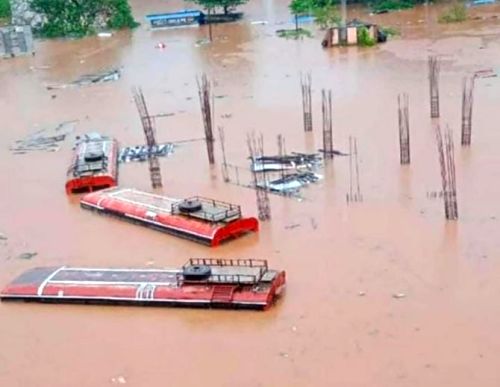 Inclement weather and heavy rains in Maharashtra's Ratnagiri are creating difficulties for the government agencies to carry out rescue operations in some inundated towns and areas of the district, a state minister said on Thursday.
Major rivers in Ratnagiri, including Jagbudi, Vashishti, Kodavali, Shastri, Bav have been flowing above the danger level following heavy rains. As a result of this, Khed, Chiplun, Lanja, Rajapur, Sangameshwar towns and nearby areas have been affected and the government agencies are engaged in the task of shifting local residents to safer places, the Maharashtra Chief Minister's Office has said earlier.
Talking to PTI over phone, Transport Minister Anil Parab, who is the district gaurdian minister of Ratnagiri, said that road connectivity in parts of the district has been completely snapped due to heavy rains.
"Chiplun town is completely inundated. Similar situation prevails in Khed. There is difficulty in reaching these places since all roads are closed.  Rescue teams from municipality, Coast Guard, Customs are using their boats to shift people from the low-lying areas. We have opened marriage halls, school buildings so that the evacuated people can spend their night there," he said.
Parab, who is in Ratnagiri to monitor the rescue and relief operations, said that National Disaster Response Force teams are unable to reach due to unfavourable weather conditions.
"The helicopters that are engaged in the operations had to go back. The stranded people will be evacuated to safer places when choppers reach. Till then, we are providing food and water to the affected people," he added.
The minister said that the region has been witnessing continuous rain and the water level of rivers is not showing signs of receding.
Earlier in the day, Chief Minister Uddhav Thackeray took a review of the situation in Ratnagiri and Raigad districts by holding a meeting with the officials. During the meeting, he said that the India Meteorological Department has issued an alert of heavy rainfall in this region for the next three days. -- PTI
« Back to LIVE