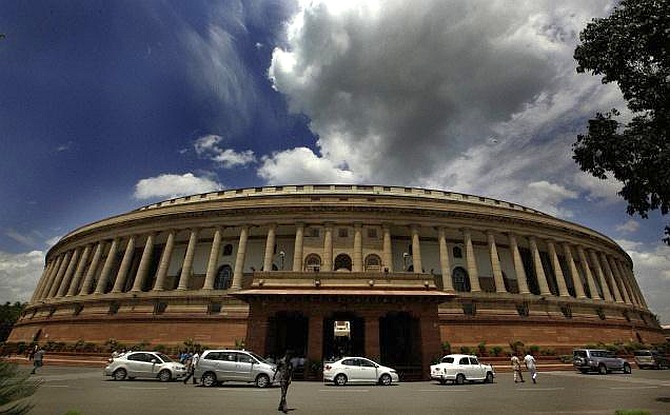 Lok Sabha saw three adjournments amid loud protests by opposition on Thursday before it was adjourned for the day.The opposition MPs protested and came near the Speaker's podium in support of their demands including repeal of new farm laws. They also held placards and raises slogans in support of their demands.
When the House met at 4 pm after three adjournments earlier, BJD member Bhartruhari Mahtab, who was in the Chair, urged members to take their seats.
"Most of you are responsible members of this House. I would request all of you to go back to your seats and allow the House to function. Whatever issues you want to discuss, I am told the government is also agreeable to having a structured discussion in the House," he said.
Two bills - Inland Vessels Bill, 2021 and Essential Defence Services Bill, 2021 - were introduced in the House amid din.
Earlier, Lok Sabha Speaker Om Birla objected to opposition members raising slogans and showing placards in the House.
He said the House is for discussion and answering questions and if the opposition members want to raise slogans and show placards, they can do so outside the House.
The Lok Sabha has seen protests from opposition from the start of the monsoon session of parliament on July 19. -- ANI
« Back to LIVE