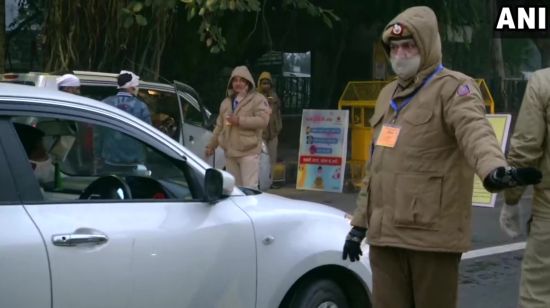 With the national capital on Tuesday witnessing two big events -- Republic Day celebrations and a farmers' tractor parade -- the city has been brought under heavy security cover with deployment of thousands of security personnel in central Delhi and several border points.
The Samkyukt Kisan Morcha, an umbrella body of 41 unions leading protests against the Centre's farm laws, said their tractor parade will not enter central Delhi and it will start only after the official Republic Day parade on Rajpath concludes.
The unions said around two lakh tractors are expected to participate in their parade, which will move into the city from three border points--Singhu, Tikri and Ghazipur (UP Gate).
According to the unions, there is no limit on vehicles.
Patrolling has been intensified at power substations in Delhi following a threat from the banned Sikhs for Justice outfit to disrupt the city's supply during the Republic Day celebrations.
An official said around 6,000 security personnel have been deployed to maintain vigil. Facial recognition systems have also been set up at vantage points for suspect identification, the official said.
The security personnel are keeping a hawk-eyed vigil over Rajpath, where President Ram Nath Kovind and Prime Minister Narendra Modi will be celebrating the occasion along with other dignitaries and thousands of people.
Checking and frisking at Rajghat will be done by personnel in PPE kits, with mask and face shield, keeping in line with COVID-19 protocols, the official said.
A five-layer security cover has been deployed in and around the city to maintain law and order, a senior police officer said.
Deputy Commissioner of Police (New Delhi) Eish Singhal said more than 6,000 police personnel have been deployed at Rajpath for the Republic Day celebrations.
-- PTI
« Back to LIVE