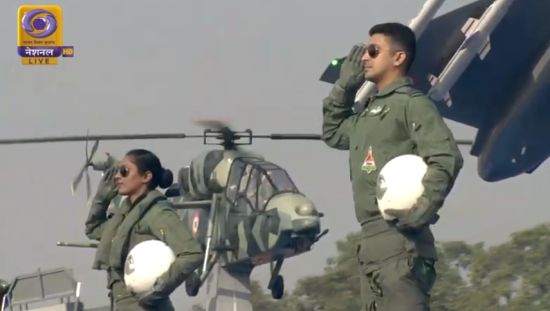 Flight Lt Bhawna Kanth, one of the first three female fighter pilots of the country, is part of the Indian Air Force tableau at the Republic Day parade.
Kanth is part of the Indian Air Force's tableau that showcased mock-ups of the light combat aircraft, light combat helicopter and the Sukhoi-30 fighter jet.
Posted at an airbase in Rajasthan, she flies the MiG-21 Bison fighter plane at present.
Kanth hails from Darbhanga in Bihar. She was born and brought up in Begusarai, where her father worked as an engineer in IOCL. She completed her schooling at the Barauni Refinery DAV Public School and graduated with a bachelor of engineering in medical electronics from BMS College of Engineering in Bengaluru. Other than flying planes, Kanth loves playing badminton, volleyball, and adventure sports and is also interested in photography, cooking, swimming, and travelling.
« Back to LIVE