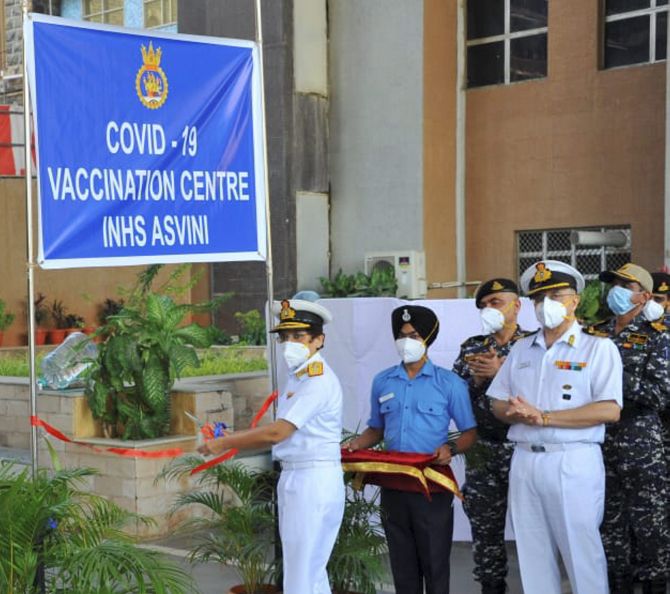 The armed forces on Saturday administered coronavirus vaccine to over 3,000 military doctors, nurses and healthcare personnel on the first day of the nation-wide vaccination drive.
Sources in the security establishment said 3,129 health care workers of the Indian Army, deployed across the country including in Ladakh and some parts of Kashmir, were given the first doses.
They said the vaccination drive will be gradually expanded and will cover the personnel deployed at frontline bases also.
According to Navy officials, the COVID-19 vaccination drive for healthcare workers in the force was inaugurated in Delhi in the presence of Chief of the Naval Staff Admiral Karambir Singh.
They said around 200 healthcare workers of the Indian Navy were administered the first doses on Saturday.
The Indian Navy carried out the vaccination drive in its eastern, southern and western naval command areas, theofficials said.
In Mumbai, the first phase of immunisation against COVID-19 was initiated at naval hospital INHS Asvini.
"The vaccination drive was rolled out with Rear Admiral Sheila Mathai, Commanding Officer, INHS Asvini receiving the first dose of the vaccine.
"A total of 100 healthcare workers including medical officers, nursing officers and other paramedical staff were vaccinated on day one there," said an official.
The Indian Air Force also launched the vaccination drive for its healthcare workers, but the number of people who were given the first doses was not immediately known.
India on Saturday rolled out the world's largest inoculation programme against COVID-19.
'Our country doctors, nurses, paramedical staff, policemen and other frontline workers who waged war against Coronavirus are now going to get a protective shield in the form of a vaccine.
'In the next phase, the vaccination campaign will reach 300 million people. It will certainly be a huge achievement,' Defence Minister Rajnath Singh tweeted.
Singh said the whole country is thankful to the scientists who have played a role in the roll-out of India's indigenous COVID-19 vaccine.
'Today Prime Minister @narendramodi has taken decisive steps towards ensuring victory over the coronavirus crisis by launching the biggest vaccination campaign not only in India but of the whole world,' he said.  -- PTI
IMAGE: Rear Admiral Sheila Mathai, VSM, Commanding Officer, inaugurates the COVID-19 vaccination drive at INHS Asvini, in Mumbai, Saturday. Navy PRO via PTI Photo
« Back to LIVE
Business emailOffice email AppDomain registrationWebsiteRediffmailMoneyCompany emailOnline ShoppingBooksGiftsVideosBlogsBuzz