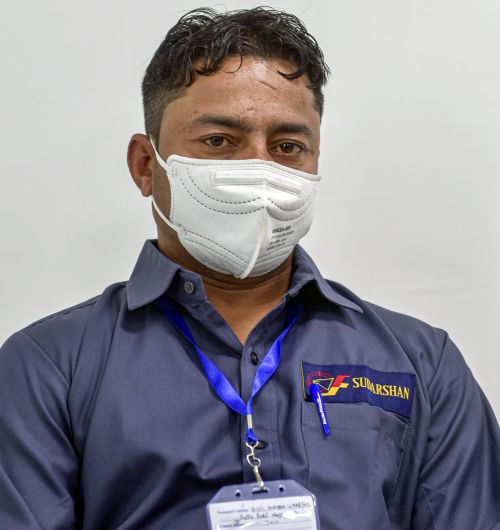 Manish Kumar gets vaccine in Delhi
Manish Kumar, a 34-year-old machine operator at AIIMS who became the first person in Delhi to get the COVID-19 vaccine, said he had himself asked the hospital authorities to be vaccinated first as his colleagues chosen for the exercise were "scared" to get the jab.
Kumar, whose mother Laxmi Rani also works at the hospital, said he was not at all nervous, had a good sleep and was "proud of getting the vaccine".
He was administered a COVID-19 vaccine during the launch of the nationwide vaccination programme at the All India Institute of Medical Sciences in the presence of Union health minister Harsh Vardhan on Saturday.
"I did not know that I am the first person to receive the vaccine. I had a good sleep last night, came here (hospital) in the morning and talked to the other staff who were to get the shot," he said.
"Many of them were scared. So, I went to my seniors and said I should be given the vaccine first. I wanted to prove to my colleagues that there is no need to be scared," Kumar told PTI.
A resident of Najafgarh, Kumar has been working at the hospital for the last eight years.
He said his wife was very nervous as well.
"She even asked me not to take the vaccine. I told her it is just an injection. After taking the dose, I asked my mother to tell my wife that I am safe," he said.
"It's been more than two hours and I feel proud and great. I would like to tell everyone that the fear about the vaccine is unwarranted. I have not noticed any reactions so far. There is no pain, or trouble breathing or difficulty in moving my limbs," he said.
Laxmi Rani said she was scared and kept praying for him. "It was to happen. The almighty gave him the chance to get the vaccine and the courage to face the fears," she said.
Shaukat Ali, Kumar's colleague and a sanitation worker at AIIMS, said he was "very scared" before he got the jab in the morning.
"I have undergone three surgeries for kidney stones. So, I was obviously scared, but Manish gave me confidence. I am not worried now, I am happy," the 37-year-old said.
Ali said he offered namaz before he stepped out of his home for the hospital at 5 am in the morning.
"I called my wife and children and told them I am safe, there is nothing to be worried about," he said.
« Back to LIVE