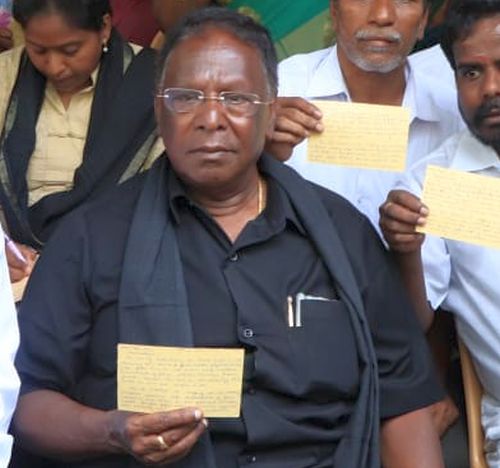 President Ram Nath Kovind has accepted the resignation of Puducherry Chief Minister V Narayanasamy and his council of Ministers, a day after they quit in the wake of losing the trust vote in the assembly.
A notification of the Union Home Ministry issued on Tuesday said: "The President has been pleased to accept resignation of V.Narayanasamy Chief Minister of Puducherry along with his council of Ministers with effect from February 22."
A copy of the notification was made available to the media in Puducherry by the Raj Nivas, the office of Puducherry Lt Governor.
Chief Secretary Ashwani Kumar said the notification has been republished in the Gazette of Puducherry government.
Narayanasamy, who led the Congress government, resigned on Monday ahead of the confidence vote after his ministry was reduced to a minority following a spate of resignations of his party MLAs and a DMK legislator in recent days .
He called on Lt Governor Tamilisai Soundararajan, who had earlier directed a floor test to prove his majority, and submitted the resignation of his four-member cabinet. -- PTI
« Back to LIVE