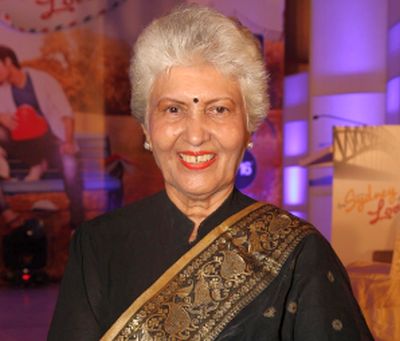 Veteran actor Shashikala, best known for her supporting roles in 1960s-70s films like Aarti, Gumrah and Chhote Sarkar, passed away on Sunday at the age of 88.
B N Tiwari, president of the Federation of Western India Cine Employees, confirmed the news of her death.
"Shashikala ji has passed away. She was 88. We don't know the exact details of her demise," Tiwari told PTI.
When contacted, filmmaker and president of the Indian Film & Television Directors' Association, Ashoke Pandit said, "Shashikala ji has passed away."
Born in Solapur, Maharashtra, Shashikala Jawalkar started acting on stage at the age of five in her hometown. After her father went bankrupt, she moved to Bombay (now Mumbai) with her family and started to look for work in movies.
She made her first big screen appearance in the 1945 movie Zeenat, directed by legendary actor Noor Jehan's husband Syed Shaukat Hussain Rizvi.
Better known by her first name, Shashikala starred in over a hundred films in her career spanning around six decades.
She went on to play small parts in various films for almost a decade and then got an opportunity to feature in V Shantaram's Teen Batti Char Raasta (1953) and Daku, the 1955 film starring Shammi Kapoor.
Her career breakthrough came in 1959 when she appeared in Bimal Roy's Sujata, one of the early movies in Hindi cinema to explore the issue of casteism.
Based on a Bengali short story of the same name by Subodh Ghosh, Sujata saw Shashikala play the real daughter of the Brahmin family that adopts Nutan's protagonist, an orphan from a low caste.
Shashikala then appeared in Tarachand Barjatya's Aarti (1962), starring Meena Kumari, Ashok Kumar, and Pradeep Kumar in the lead. The film proved to be a stepping stone for Shashikala as she went on to become one of the go-to actors for filmmakers to portray negative parts.
She then appeared in supporting roles in classics like Gumrah (1963), Waqt (1965), Anupama (1966) and Phool Aur Patthar (1966) and returned to playing a vamp in the Shammi Kapoor-Sadhana-starrer Chhote Sarkar (1974).
Later in her career, she switched to character roles appearing in 1980's Khubsoorat, fronted by Rekha, Sunny Deol-led Arjun (1985), Khamosh Nigahen (1986), Ghar Ghar Ki Kahani (1988), Sach (1989), Govinda's Pardesi Babu (1998), Shah Rukh Khan-starrer Baadshah (1999), Karan Johar's directorial Kabhi Khushi Kabhie Gham, musical hit Jhankaar Beats (2003) and Mujhse Shaadi Karogi (2004) and Padmashree Laloo Prasad Yadav in 2005.
Shashikala switched to television in 2000s and went on to play pivotal parts in serials Apnaapan, Dil Deke Dekho and Son Pari.
She received Padma Shri, the country's fourth highest civilian award, in 2007 for her contribution to the Indian cinema.
In her early 20s, she married Om Prakash Saigal, who belonged to the KL Saigal family, and had two daughters, one of whom later passed away due to cancer.
Personalities like legendary singer Lata Mangeshkar, actor-filmmaker Farhan Akhtar, producer Naved Jafri, Union minister Jitendra Singh and Nationalist Congress Party supremo Sharad Pawar paid rich tributes to the late star. -- PTI
« Back to LIVE

The 79-year-old widely respected and popular leader steered the Congress in 2017 to a landslide victory in the 117-member assembly to occupy the chief minister's post for the second time.

Hasaranga, Chameera have provided new dimension to the team: Kohli

Royal Challengers Bangalore skipper Virat Kohli on Saturday said his side will not take the good showing in the first leg of the IPL for granted, adding that latest additions, including Sri Lanka's Wanidu Hasaranga and Dushmantha...

Congress veteran Amarinder Singh on Saturday resigned as chief minister of Punjab, capping months of a power tussle that had polarised the ruling party in the state headed for elections in just about four months.

Jakhar, who is not an MLA, is believed to be close the top leadership and is considered a prominent Hindu face of the party.