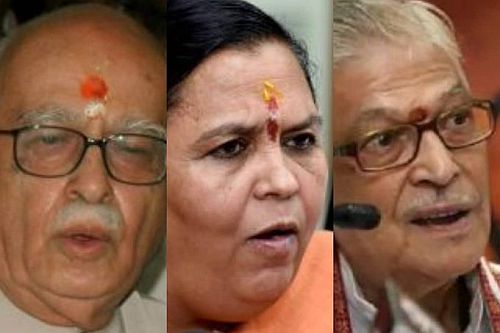 Update: The Babri mosque demolition was not planned, Judge SK Yadav, said while announcing the verdict at the Special CBI court in Lucknow, Uttar Pradesh. All 32 accused including BJP leaders LK Advani, Murli Manohar Joshi and Uma Bharti, have been acquitted.
The court observed: Babri mosque demolition was not pre-planned.
Not enough evidence against the accused.
Can't probe authenticity of audio, video provided by CBI.
Those who climbed on the dome are anti-social elements.
The audio of the speech is not clear.
The accused tried to stop the anti-social elements from climbing the dome.
The case relates to the razing of the disputed structure in Ayodhya on December 6, 1992. The 32 accused persons include former deputy prime minister Advani, former Union minister Joshi and Uma Bharti, former Uttar Pradesh chief minister Kalyan Singh, during whose tenure the structure was pulled down, besides Vinay Katiyar and Sadhvi Rithambara. Champat Rai, the general secretary of the trust in charge of constructing the temple, is also among the accused. The CBI, which went into the case, produced 351 witnesses and 600 documents as evidence before the court.
Charges were framed against 48 people, but 16 had died during the course of the trial. Over two dozen of 32 accused were present. Advani (92), Joshi (86), Bharti (61), Singh (88), Nritya Gopal Das and Satish Pradhan were not present in court.
« Back to LIVE

The senior bureaucrat, before being transferred to MEDD, was the collector of Kolhapur and had handled the 2019 floods that ravaged the western Maharashtra district.

The ministry of electronics and IT had set a deadline of July 4, failing which Twitter could have lost the intermediary status, which means it will be liable for all the comments posted on its platform.

At least 6 killed, 24 injured in shooting at July 4 parade in US

The Independence Day parade in Highland Park, Illinois, a northern suburb of Chicago, erupted in panic when shots were fired about 10 minutes after the parade kicked off, according to media reports. As per US media, an active shooter...

England's highest successful run chase came in 2019 when they reached a 359-run target in an Ashes test against Australia on the back of Stokes's brilliant unbeaten century.

Images from Day 8 of Wimbledon 2022 at the All England Lawn Tennis and Croquet Club in London, on Monday.